The Orbital Description of the Alkene Double Bond


The Orbital Description of the Alkene Double Bond

– In a Lewis structure, the double bond of an alkene is represented by two pairs of electrons between the carbon atoms.

– The Pauli exclusion principle tells us that two pairs of electrons can go into the region of space between the carbon nuclei only if each pair has its own molecular orbital.

– Using ethylene as an example, let’s consider how the electrons are distributed in the double bond

– we can visualize the sigma bonds of organic molecules using hybrid atomic orbitals.

– In ethylene, each carbon atom is bonded to three other atoms (one carbon and two hydrogens), and there are no nonbonding electrons.

– Sp2 hybridization corresponds to bond angles of about 120°, giving optimum separation of three atoms bonded to the carbon atom. 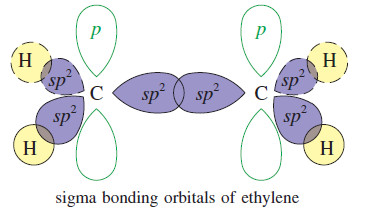 – Each of the carbon–hydrogen sigma bonds is formed by overlap of an orbital on carbon with the 1s orbital of a hydrogen atom.

– The (s) orbital is closer to the nucleus than the (p) orbital, contributing to shorter bonds.

– The remaining sp2 orbitals overlap in the region between the carbon nuclei, providing a bonding orbital.

– The pair of electrons in this bonding orbital forms one of the bonds between the carbon atoms.

– This bond is a sigma bond because its electron density is centered along the line joining the nuclei.

– The C=C bond in ethylene (1.33 Å) is much shorter than the C-C bond (1.54 Å) in ethane, partly because the sigma bond of ethylene is formed from sp2 orbitals (with more s character) and partly because there are two bonds drawing the atoms together.

– The second carbon–carbon bond is a pi bond.

– Two more electrons must go into the carbon–carbon bonding region to form the double bond in ethylene.

– Each carbon atom still has an unhybridized p orbital, and these overlap to form a pi-bonding molecular orbital.

– The two electrons in this orbital for the second bond between the double-bonded carbon atoms.

– For pi overlap to occur, these p orbitals must be parallel, which requires that the two carbon atoms be oriented with all their C-H bonds in a single plane (Figure).

– Half of the pi-bonding orbital is above the C-C sigma bond, and the other half is below the sigma bond.

– The pi-bonding electrons give rise to regions of high electron density (red) in the electrostatic potential map of ethylene shown in Figure above.

– The following Figure shows that the two ends of the ethylene molecule cannot be twisted with respect to each other without disrupting the pi bond.

– Unlike single bonds, a carbon–carbon double bond does not permit rotation.

– Six atoms, including the double-bonded carbon atoms and the four atoms bonded to them, must remain in the same plane. This is the origin of cis trans isomerism.

– If two groups are on the same side of a double bond (cis), they cannot rotate to opposite sides (trans) without breaking the pi bond.

– The Figure above shows that there are two distinct isomers of but-2-ene: cis-but-2-ene and trans-but-2-ene.