How To Write Lewis Structures 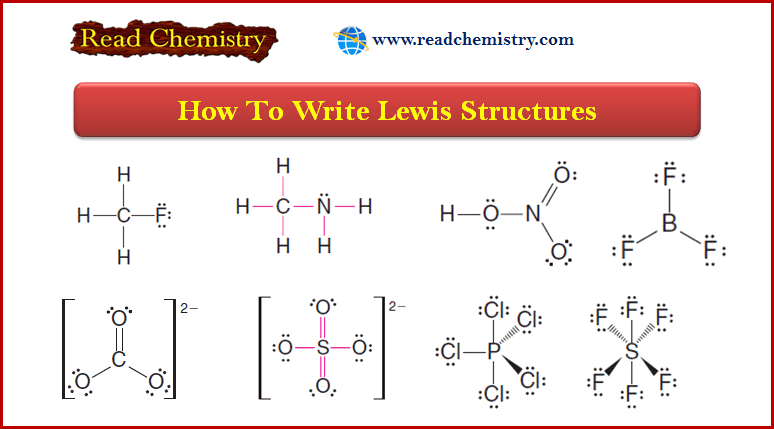 (1) Lewis structures show the connections between atoms in a molecule or ion using only the valence electrons of the atoms involved. Valence electrons are those of an atom’s outermost shell.

3. We then add the remaining electrons in pairs so as to give each hydrogen 2 electrons (a duet) and every other atom 8 electrons (an octet). In our example, we assign the remaining 6 valence electrons to the fluorine atom in three nonbonding pairs.

Solved problem (2): Write a Lewis structure for methylamine (CH3NH2).
Strategy and Answer:
1. We find the total number of valence electrons for all the atoms.

2. We use one electron pair to join the carbon and nitrogen.

(5) If necessary, we use multiple bonds to satisfy the octet rule (i.e., give atoms the noble gas configuration).
The carbonate ion (CO32-) illustrates this:

The organic molecules ethene (C2H4) and ethyne (C2H2), as mentioned earlier, have a double and triple bond, respectively:

Solved problem (3):Write the Lewis structure of CH2O (formaldehyde).
Strategy and Answer:
1. Find the total number of valence electrons of all the atoms:

2.(a) Use pairs of electrons to form single bonds

Solved problem (4):Assume that the atoms are connected in the same way they are written in the formula, and write a Lewis structure for the toxic gas hydrogen cyanide (HCN).
Strategy and Answer:
1. We find the total number of valence electrons on all of the atoms:

Exceptions to the Octet Rule

(1) Atoms share electrons, not just to obtain the configuration of an inert gas, but because sharing electrons produces increased electron density between the positive nuclei. The resulting attractive forces of nuclei for electrons is the “glue” that holds the atoms together
Elements of the second period of the periodic table can have a maximum of four bonds (i.e., have eight electrons around them) because these elements have only one 2s and three 2p orbitals available for bonding.
(2) Each orbital can contain two electrons, and a total of eight electrons fills these orbitals The octet rule, therefore, only applies to these elements, and even here, as we shall see in compounds of beryllium and boron, fewer than eight electrons are possible.
Elements of the third period and beyond have d orbitals that can be used for bonding.
(3) These elements can accommodate more than eight electrons in their valence shells and therefore can form more than four covalent bonds. Examples are compounds such as PCl5 and SF6. Bonds written as (dashed wedges) project behind the plane of the paper. Bonds written as (solid wedges) project in front of the paper.

Solved problem (5): Write a Lewis structure for the sulfate ion (SO42-)
(Note: The sulfur atom is bonded to all four oxygen atoms.)
Strategy and Answer:
1. We find the total number of valence electrons including the extra 2 electrons needed to give the ion the double negative charge:

2. We use four pairs of electrons to form bonds between the sulfur atom and the four oxygen atoms

(4) Some highly reactive molecules or ions have atoms with fewer than eight electrons in their outer shell.
An example is boron trifluoride (BF3). In a BF3 molecule the central boron atom has only six electrons around it:

Share
Previous Nomenclature of Acids, Bases and Hydrates
Next Formal Charges and How To Calculate Them