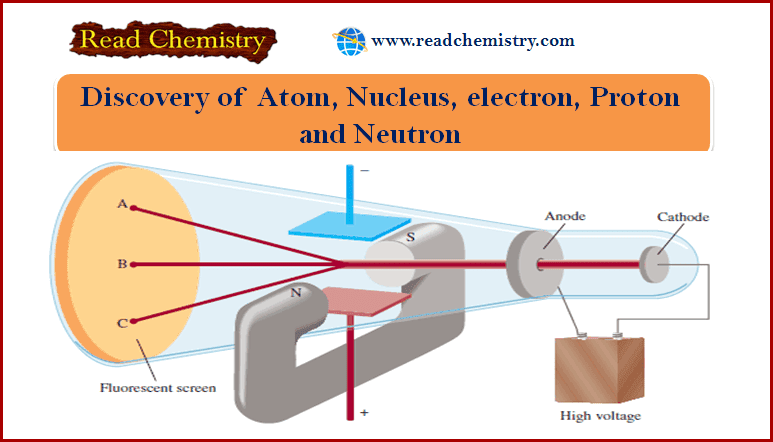 Definition of a tom

** On the basis of Dalton’s atomic theory, we can define an atom as the basic unit of an element that can enter into chemical combination.
** Dalton imagined an atom that was both extremely small and indivisible. However, a series of investigations that began in the 1850s and extended into the twentieth century clearly demonstrated that atoms actually possess internal structure; that is, they are made up of even smaller particles, which are called subatomic particles. This research led to the discovery of three such particles: electrons, protons, and neutrons.

Discovery of the electron

**In the 1890s many scientists became caught up in the study of radiation, the emission and transmission of energy through space in the form of waves.
** Information gained from this research contributed greatly to our understanding of atomic structure.
** One device used to investigate this phenomenon was a cathode ray tube, the forerunner of the television tube (see Figure blow).
(1) It is a glass tube from which most of the air has been evacuated.
(2) When the two metal plates are connected to a high-voltage source, the negatively charged plate, called the cathode, emits an invisible ray.
(3) The cathode ray is drawn to the positively charged plate, called the anode, where it passes through a hole and continues traveling to the other end of the tube.
(4) When the ray strikes the specially coated surface, it produces a strong fluorescence, or bright light.

(5) In some experiments, two electrically charged plates and a magnet were added to the outside of the cathode ray tube (see Figure above).
(6) When the magnetic field is on and the electric field is off, the cathode ray strikes point A. When only the electric field is on, the ray strikes point C. When both the magnetic and the electric fields are off or when they are both on but balanced so that they cancel each other’s influence, the ray strikes point B.
** According to electromagnetic theory, a moving charged body behaves like a magnet and can interact with electric and magnetic fields through which it passes.
** Because the cathode ray  is attracted by the plate bearing positive charges and repelled by the plate bearing negative charges, it must consist of negatively charged particles. We know these negatively charged particles as electrons.

Calculation of the mass of an electron

** An English physicist, J. J. Thomson, used a cathode ray tube and his knowledge of electromagnetic theory to determine the ratio of electric charge to the mass of an individual electron.The number he came up with is  – 1.76 x 108 C/g, where C stands for coulomb, which is the unit of electric charge.
** Thereafter, in a series of experiments carried out between 1908 and 1917, R. A. Millikan, an American physicist, found the charge of an electron to be – 1.6022 x 10-19 C. From these data he calculated the mass of an electron:

which is an exceedingly small mass.

** In 1895, the German physicist Wilhelm Röntgen noticed that cathode rays caused glass and metals to emit very unusual rays.This highly energetic radiation penetrated matter, darkened covered photographic plates, and caused a variety of substances to fluoresce. Because these rays could not be deflected by a magnet, they could not contain charged particles as cathode rays do. Röntgen called them X rays.
**Not long after Röntgen’s discovery, Antoine Becquerel, a professor of physics in Paris, began to study fluorescent properties of substances. Purely by accident, he found that exposing thickly wrapped photographic plates to a certain uranium compound caused them to darken, even without the stimulation of cathode rays. Like X rays, the rays from the uranium compound were highly energetic and could not be deflected by a magnet, but they differed from X rays because they were generated spontaneously.
** One of Becquerel’s students, Marie Curie, suggested the name radioactivity to describe this spontaneous emission of particles and/or radiation. Consequently, any element that spontaneously emits radiation is said to be radioactive.
** Further investigation revealed that three types of rays are produced by the decay, or breakdown, of radioactive substances such as uranium. Two of the three kinds are deflected by oppositely charged metal plates (Figure blow):
Alpha (α) rays: consist of positively charged particles, called α particles, and therefore are deflected by the positively charged plate.
Beta (β) rays, or β particles: are electrons and are deflected by the negatively charged plate.
gamma (γ) rays: The third type of radioactive radiation consists of high–energy rays . It Likes X rays, γ rays have no charge and are not affected by an external electric or magnetic field. 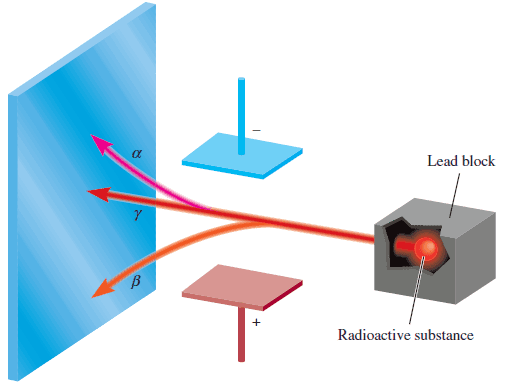 Discovery of  the Proton and the Nucleus

** By the early 1900s, two features of atoms had become clear: They contain electrons, and they are electrically neutral.
** To maintain electrical neutrality, an atom must contain an equal number of positive and negative charges.
** On the basis of this information, Thomson proposed that an atom could be thought of as a uniform, positive sphere of matter in which electrons are embedded (Figure blow). Thomson’s so called “plum pudding” model was the accepted theory for a number of years. 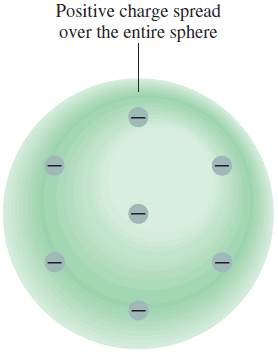 ** In 1910 the New Zealand physicist Ernest Rutherford, who had earlier studied with Thomson at Cambridge University, decided to use α particles to probe the structure of atoms.
**Together with his associate Hans Geiger and an undergraduate named Ernest Marsden, Rutherford carried out a series of experiments using very thin foils of gold and other metals as targets for α particles from a radioactive source (Figure blow). They observed that:
(1) the majority of particles penetrated the foil either undeflected or with only a slight deflection.
(2) They also noticed that every now and then an a particle was scattered (or deflected) at a large angle.
(3) In some instances, an α particle actually bounced back in the direction from which it had come! This was a most surprising finding, for in Thomson’s model the positive charge of the atom was so diffuse (spread out) that the positive α particles were expected to pass through with very little deflection.
(4) To quote Rutherford’s initial reaction when told of this discovery: “It was as incredible as if you had fired a 15-inch shell at a piece of tissue paper and it came back and hit you.”

Figure shows:
(a) Rutherford’s experimental design for measuring the scattering of α particles by a piece of gold foil. Most of the a particles passed through the gold foil with little or no deflection. A few were deflected at wide angles. Occasionally an a particle was turned back.
(b) Magnified view of α particles passing through and being deflected by nuclei.
** To explain the results of the α-scattering experiment, Rutherford devised a new model of atomic structure, suggesting that most of the atom must be empty space. This structure would allow most of the α particles to pass through the gold foil with little or no deflection.
** The atom’s positive charges, Rutherford proposed, are all concentrated in the nucleus, a dense central core within the atom. Whenever an α particle came close to a nucleus in the scattering experiment, it experienced a large repulsive force and therefore a large deflection. Moreover, an a particle traveling directly toward a nucleus would experience an enormous repulsion that could completely reverse the direction of the moving particle.
** The positively charged  particles in the nucleus are called protons.
** In separate experiments, it was found that the charge of each proton has the same magnitude as that of an electron and that the mass of the proton is 1.67262 x 10-24 g —about 1840 times the mass of the oppositely charged electron.
** At this stage of investigation, scientists perceived the atom as follows. The mass of a nucleus constitutes most of the mass of the entire atom, but the nucleus occupies only about 1/1013 of the volume of the atom. We express atomic (and molecular) dimensions in terms of the SI unit called the picometer (pm).
1 pm =  1 x 10-12  m
**A typical atomic radius is about 100 pm, whereas the radius of an atomic nucleus is only about 5 x 10-3 pm. You can appreciate the relative sizes of an atom and its nucleus by imagining that if an atom were the size of a sports stadium, the volume of its nucleus would be comparable to that of a small marble.

** Although the protons are confined to the nucleus of the atom, the electrons are conceived of as being spread out about the nucleus at some distance from it.

Discovery of the Neutron

** Rutherford’s model of atomic structure left one major problem unsolved. It was known that hydrogen, the simplest atom, contains only one proton and that the helium atom contains two protons. Therefore, the ratio of the mass of a helium atom to that of a hydrogen atom should be 2:1. (Because electrons are much lighter than protons, their contribution can be ignored.) In reality, however, the ratio is 4:1.
** Rutherford and others postulated that there must be another type of subatomic particle in the atomic nucleus; the proof was provided by another English physicist, James Chadwick, in 1932. When Chadwick bombarded a thin sheet of beryllium with a particles, a very high energy radiation similar to γ rays was emitted by the metal. Later experiments showed that the rays actually consisted of electrically neutral particles having a mass slightly greater than that of protons. Chadwick named these particles neutrons.
** The mystery of the mass ratio could now be explained. In the helium nucleus there are two protons and two neutrons, but in the hydrogen nucleus there is only one proton and no neutrons; therefore, the ratio is 4:1.
** Figure shows the location of the elementary particles (protons, neutrons, and electrons) in an atom. There are other subatomic particles, but the electron, the proton, and the neutron are the three fundamental components of the atom that are important in chemistry. 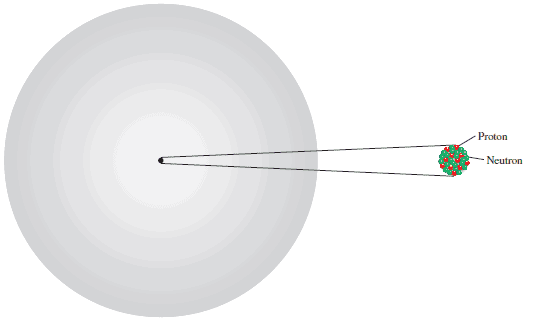 ** Table shows the masses and charges of these three elementary particles:

Share
Previous System, Surroundings, and State
Next Equipment and Manipulations Associated with weighing