❒ The strength of a Brønsted–Lowry acid depends on the extent to which a proton can be separated from it and transferred to a base. Removing the proton involves breaking a bond to the proton, and it involves making the conjugate base more electrically negative.

Acidity within The periodic Table

❒When we compare compounds in a single column of the periodic table, the strength of the bond to the proton is the dominating effect.
(A) Bond strength to the proton decreases as we move down the column, increasing its acidity.
❒This phenomenon is mainly due to decreasing effectiveness of orbital overlap between the hydrogen 1s orbital and the orbitals of successively larger elements in the column. The less effective the orbital overlap, the weaker is the bond, and the stronger is the acid. The acidities of the hydrogen halides furnish an example: 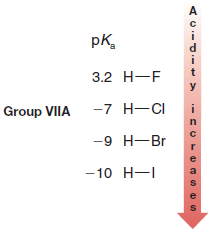 ❒Comparing the hydrogen halides with each other, H-F is the weakest acid and H-I is the strongest. This follows from the fact that the H-F bond is by far the strongest and the H-I bond is the weakest.
❒Because HI, HBr, and HCl are strong acids, their conjugate bases (I–, Br–, Cl–) are all weak bases. HF, however, is less acidic than the other hydrogen halides and fluoride ion is a stronger base. The fluoride anion is still not nearly as basic as other species we commonly think of as bases, such as the hydroxide anion, however.
(B) Acidity increases from left to right when we compare compounds in a given row of the periodic table.
❒Bond strengths vary somewhat, but the predominant factor becomes the electronegativity of the atom bonded to the hydrogen. The electronegativity of the atom in question affects acidity in two related ways:
(1) it affects the polarity of the bond to the proton
(2) it affects the relative stability of the anion (conjugate base) that forms when the proton is lost.
❒We can see an example of this effect when we compare the acidities of the compounds CH4, NH3, H2O, and HF. These compounds are all hydrides of first-row elements, and electronegativity increases across a row of the periodic table from left to right:

❒Because fluorine is the most electronegative, the bond in H-F is most polarized, and the proton in H-F is the most positive. Therefore, H-F loses a proton most readily and is the most acidic in this series:

❒Electrostatic potential maps for these compounds directly illustrate this trend based on electronegativity and increasing polarization of the bonds to hydrogen . Almost no positive charge (indicated by the extent of color trending toward blue) is evident at the hydrogens of methane. Very little positive charge is present at the hydrogens of ammonia. This is consistent with the weak electronegativity of both carbon and nitrogen and hence with the behavior of methane and ammonia as exceedingly weak acids (pKa values of 48 and 38, respectively). Water shows significant positive charge at its hydrogens (pKamore than 20 units lower than ammonia), and hydrogen fluoride clearly has the highest amount of positive charge at its hydrogen (pKa of 3.2), resulting in strong acidity.
❒Because H-F is the strongest acid in this series, its conjugate base, the fluoride ion (F–), will be the weakest base. Fluorine is the most electronegative atom and it accommodates the negative charge most readily:
❒The methanide ion (CH3–) is the least stable anion of the four, because carbon being the least electronegative element is least able to accept the negative charge. The methanide ion, therefore, is the strongest base in this series. [The methanide ion, a carbanion, and the amide ion (–NH2) are exceedingly strong bases because they are the conjugate bases of extremely weak acids.
❒Trends in acidity within the periodic table are summarized in the following Figure: The Effect of Hybridization

(A) An alkyne hydrogen is weakly acid. Alkene and alkane hydrogens are essentially not acidic.
❒The pKavalues for ethyne, ethene, and ethane illustrate this trend.

❒We can explain this order of acidities on the basis of the hybridization state of carbon in each compound. Electrons of 2s orbitals have lower energy than those of 2p orbitals because electrons in 2s orbitals tend, on the average, to be much closer to the nucleus than electrons in 2p orbitals. (Consider the shapes of the orbitals: 2s orbitals are spherical and centered on the nucleus; 2p orbitals have lobes on either side of the nucleus and are extended into space.)
(B) With hybrid orbitals, having more s character means that the electrons of the anion will, on the average, be lower in energy, and the anion will be more stable.
❒The sp orbitals of the C-H bonds of ethyne have 50% s character (because they arise from the combination of one s orbital and one p orbital), those of the sp2orbitals of ethene have 33.3% s character, while those of the sp3orbitals of ethane have only 25% s character. This means, in effect, that the sp carbon atoms of ethyne act as if they were more electronegative than the sp2carbon atoms of ethene and the sp3 carbon atoms of ethane. (Remember: electronegativity measures an atom’s ability to hold bonding electrons close to its nucleus, and having electrons closer to the nucleus makes it more stable.)
(C) An sp carbon atom is effectively more electronegative than an sp2 carbon, which in turn is more electronegative than an sp3 carbon.
❒The effect of hybridization and effective electronegativity on acidity is borne out in the calculated electrostatic potential maps for ethyne, ethene, and ethane shown in the following Figure:

Some positive charge (indicated by blue color) is clearly evident on the hydrogens of ethyne (pKa= 25), but almost no positive charge is present on the hydrogens of ethene and ethane (both having pKa values more than 20 units greater than ethyne).
❒In summary, the order of relative acidities of ethyne, ethene, and ethane parallels the effective electronegativity of the carbon atom in each compound:
Relative Acidity of the Hydrocarbons:

As expected based on the properties of acid–base conjugate pairs, an sp3carbanion is the strongest base in a series based on carbon hybridization, and an sp carbanion (an alkynide) is the weakest base. This trend is illustrated here with the conjugate bases of ethane, ethene, and ethyne.
Relative Basicity of the Carbanions:

❒The carbon–carbon bond of ethane is completely nonpolar because at each end of the bond there are two identical methyl groups:

❒This is not the case with the carbon–carbon bond of ethyl fluoride, however:

❒One end of the bond, the one nearer the fluorine atom, is more negative than the other. This polarization of the carbon–carbon bond results from an intrinsic electron-attracting ability of the fluorine (because of its electronegativity) that is transmitted through space and through the bonds of the molecule. Chemists call this kind of effect an inductive effect.
Inductive effects are electronic effects transmitted through bonds. The inductive effect of a group can be electron donating or electron withdrawing. Inductive effects weaken as the distance from the group increases.
❒In the case of ethyl fluoride, the positive charge that the fluorine imparts to C1 is greater than that imparted to C2 because the fluorine is closer to C1.
❒The following figure shows the dipole moment for ethyl fluoride (fluoroethane). The distribution of negative charge around the electronegative fluorine is plainly evident in the calculated electrostatic potential map.

Share
Previous Thermodynamics in Organic Chemistry
Next Concept Of Hybridization