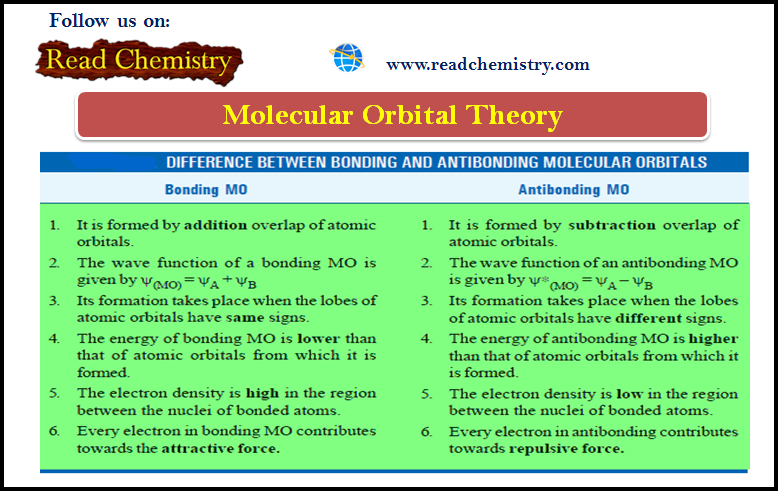 The M.O. formed is called bonding molecular orbital. It lowers the energy and brings about the stability in the system.
(2) Molecular orbital is formed by the subtraction of wave functions of atomic orbitals. It can be represented by:

❒ The wave functions either have (+) or (–) sign. The positive sign shown on 1s orbitals of hydrogen atoms shows that these orbitals are spherically symmetrical and their wave functions are associated with +ve sign in all directions. In case of p-orbitals one lobe has +ve sign while other has –ve sign. The overlapping of atomic orbitals takes place if they have similar signs on their lobes.
❒ The probability density in bonding and antibonding molecular orbitals is given by the square of the wave functions shown in the equations (1) and (2): 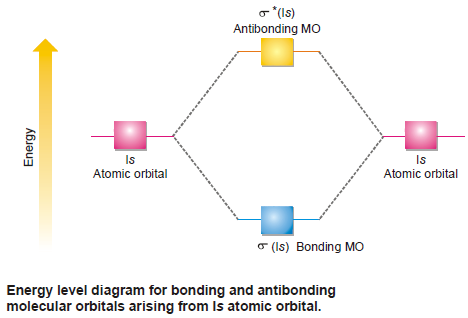 Combination of p-orbitals is slightly complicated. There being three types of 2p orbitals namely 2px, 2py and 2pzdirected along the cartesian co-ordinates x, y and z respectively. By convention we assume that z-axis is the intermolecular axis.

❒ When two 2pz orbitals on two atoms approach each other along the internuclear axis they combine by the addition of electron wave.
❒ This results in the formation of bonding σ (2pz) orbital while subtraction of electron waves give rise to antibonding molecular orbital σ* (2pz). It is represented as follows :

(2) Combination of 2py and 2pxatomic orbitals 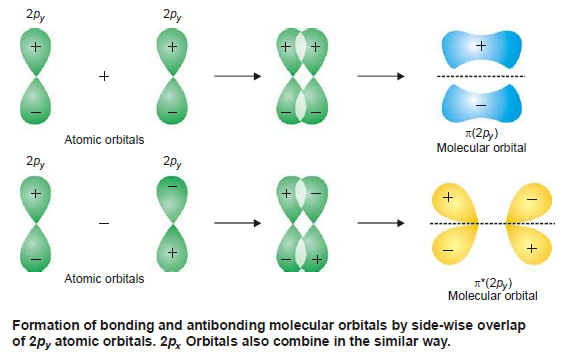 ❒ Since we are concerned here with few simple molecules, the only molecular orbitals which need to be considered are:

❒ They are arranged in their increasing order of energy as determined by spectroscopic measurements.
❒ It is clear from Fig (1) that the three 2p atomic orbitals of isolated atoms are all degenerate but this degeneracy splits in the molecular orbitals. The σ (2pz) bonding molecular orbital has a lower energy than either of the remaining two degenerate π bonding molecular orbitals –π (2py) and π (2px).
❒ For diatomic molecules obtained from atom having more than one electronic shell, the inner shells do not appreciably affect the bonding and may be omitted. Such inner electrons are called Non-bonding electrons.
❒ Electronic structures of simple molecules can be worked out by feeding electrons in the molecular orbitals in the order of increasing energy. Here also Aufbau principle–feeding electrons in the increasing order of energy of orbitals repeats itself. This order shown in Fig. (1) may be written as :

Conditions for the combination of Atomic Orbitals

Due to symmetry reasons allowed combinations of atomic orbitals are given in the following  table: The difference between bonding and antibonding orbitals is summarised below: 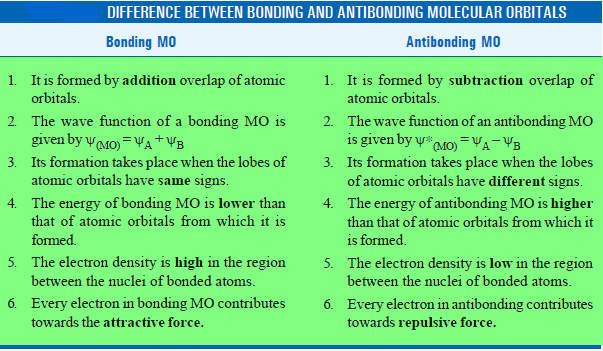 Combination of s and pz-orbitals

s and pz-orbitals can also combine in a similar way along internuclear axis to form bonding and
antibonding molecular orbitals as shown in the following figure:

The main points of difference between sigma and Pi molecular orbitals can be summed up in the
following table:

❒ In common practice, only MOs formed from valence orbitals are considered for determining bond order.
❒ The predicted bond orders are found to be in conformity with other methods of determining it. Thus Molecular Orbital theory helps in establishing whether the existence of a bond is feasible or not. For instance, the formation of He2 molecule, discussed in the following section, is completely ruled out as the bond order predicted is zero.
❒ In general,
(a) A molecule is stable if Nb > Na
(b) A molecule is unstable if Nb < Na

Information given by Bond order

The bond order as determined by the above formula is very helpful as it gives us the following
valuable information :
(1) Stability of the Molecule/Ion
A molecule/ion is stable if Nb > Na
(2) Bond Dissociation Energy
It depends upon the bond order. Greater the bond order greater is the bond dissociation energy.
(3) Bond Length
Bond order is inversely proportional to the bond length. Higher the bond order, smaller the bond
length.
(4) Magnetic Properties
The presence of unpaired electrons in Molecular orbitals of a species makes it paramagnetic in nature. Greater the number of unpaired electrons, the more will be its paramagnetic character. On the other hand, if there are no unpaired electrons in MOs the species will be diamagnetic in nature.
Reference: Essentials of Physical Chemistry /Arun Bahl, B.S Bahl and G.D. Tuli / multicolour edition. 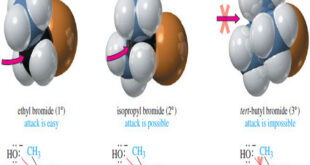