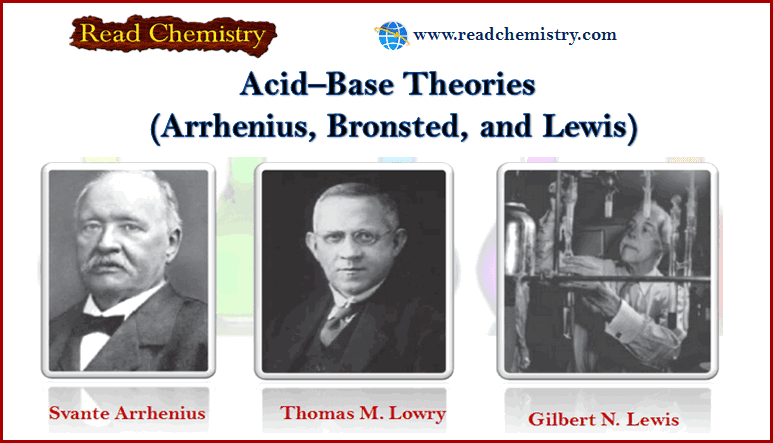 ** Several acid–base theories have been proposed to explain or classify acidic and basic properties of substances.
** You are probably most familiar with the Arrhenius theory, which is applicable only to water.
** Other theories are more general and are applicable to other solvents or even the gas phase.
** We describe the common acid–base theories here.

** Arrhenius, as a graduate student, introduced a dramatically new theory that:
An acid: is any substance that ionizes (partially or completely) in water to give hydrogen ions (which associate with the solvent to give hydronium ions, H3O+)

A base: is any substance that ionizes in water to give hydroxide ions.
Weak (partially ionized) bases generally ionize as follows:

while strong bases such as metal hydroxides (e.g., NaOH) dissociate as:

** This theory is obviously restricted to water as the solvent.

** In 1905, Franklin was working in liquid NH3 as solvent and noticed the similarity with acid-base behavior in water.
** In 1925, Germann, working with liquid COCl2 as solvent  is observed the similarities as well and formulated a general solvent system concept of acids and bases.
** This theory recognizes the ionization of a solvent to give a cation and an anion; for example:

An acid: is defined as a solute that yields the characteristic cation of the solvent
A base: is a solute that yields the characteristic anion of the solvent.
Examples:
NH4Cl (which produces ammoniated NH4+, i.e., [NH4(NH3)+], and Cl−) is a strong acid in liquid ammonia (similar to HCl in water: HCl + H2O → H3O+ + Cl−)
NaNH2 is a strong base in ammonia (similar to NaOH in water); both of these compounds ionize to give the characteristic solvent cation and anion, respectively.
Ethanol  ionizes as follows: 2C2H5OH ⇔ C2H5OH2+  + C2H5O−. Hence, sodium ethoxide, NaOC2H5 , is a strong base in this solvent.
Summary: Franklin and Germann’s theory is similar to the Arrhenius theory but is applicable also to other ionizable solvents.

** The theory of solvent systems is suitable for ionizable solvents, but it is not applicable to acid–base reactions in nonionizable solvents such as benzene or dioxane.
** In 1923, Brønsted and Lowry independently described what is now known as the Brønsted–Lowry theory.
** This theory states that:
An acid: is any substance that can donate a proton
A base: is any substance that can accept a proton.
** Thus, we can write a “half-reaction”a

** The acid and base of a half-reaction are called conjugate pairs.
** Free protons do not exist in solution, and there must be a proton acceptor (base) before a proton donor (acid) will release its proton. That is, there must be a combination of two half-reactions.
** Another way to look at it is that an acid is an acid because it can lose a proton. However, it cannot exhibit its acidic behavior unless there is a base present to accept the proton. It is like being wealthy on a deserted island with no one to accept your money.
** Some acid–base reactions in different solvents are illustrated in  the Table:

(a) In the first example, acetate ion is the conjugate base of acetic acid and ammonium ion is the conjugate acid of ammonia.
(b) The first four examples represent ionization of an acid or a base in a solvent,
(c) the others represent a neutralization reaction between an acid and a base in the solvent.
** It is apparent from the above definition that a substance cannot act as an acid unless a base is present to accept the protons. Thus, acids will undergo complete or partial ionization in basic solvents such as water, liquid ammonia, or ethanol, depending on the basicity of the solvent and the strength of the acid. But in neutral or “inert” solvents, ionization is insignificant. However, ionization in the solvent is not a prerequisite for an acid–base reaction, as in the last example in the table, where picric acid reacts with aniline.
Summary: The Brønsted–Lowry theory assumes a transfer of protons from an acid to a base, i.e., conjugate pairs.

** In 1923, G. N. Lewis introduced the electronic theory of acids and bases. In the Lewis theory:
An acid: is a substance that can accept an electron pair
A base: is a substance that can donate an electron pair.
** The latter frequently contains an oxygen or a nitrogen as the electron donor. Thus, nonhydrogen-containing substances are included as acids.
** Examples of acid–base reactions in the Lewis theory are as follows: 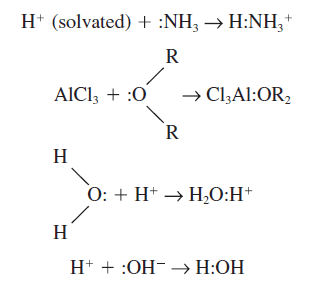