❒ We have already seen that heat changes in chemical reactions are equal to the difference in internal energy (ΔE) or heat content (ΔH) of the products and reactants, depending upon whether the reaction is studied at constant volume or constant pressure.
❒ Since ΔE and ΔH are functions of the state of the system, the heat evolved or absorbed in a given reaction must be independent of the manner in which the reaction is brought about. Thus it depends only on the initial state and final states of the system and not the manner or the steps in which the change takes place. This generalization is known as Hess’s Law
❒ Hess’s Law may be stated as:
If a chemical change can be made to take place in two or more different ways whether in one step or two or more steps, the amount of total heat change is same no matter by which method the change is brought about.
❒ The law also follows as a mere consequence of the first law of thermodynamics.
❒ Let us suppose that a substance A can be changed to Z directly:

where Q1 is the heat evolved in the direct change. When the same change is brought about in stages:

the total evolution of heat = q1 + q2 + q3 = Q2
❒According to Hess’s law Q1 = Q2. If it be not so, let Q2> Q1. Then by transforming A to Z through stages and retransforming directly back to A, there would be gain of heat energy = Q2– Q1.
❒ By repeating the process again and again an unlimited heat energy will be developed in an isolated system. This goes against the first law of thermodynamics. Hence Q1 must be equal to Q2.
❒ Hess’s law has been tested experimentally and shown to be true.

❒ It is evident from above that the total heat energy evolved is the same in the two cases the following figure: 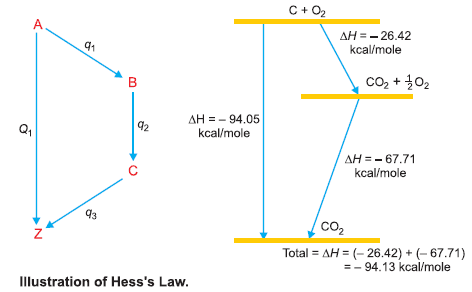 (2) Formation of Sodium hydroxide from Na

❒ The formation of sodium hydroxide from metallic sodium presents another example of Hess’s law. The process can be carried out in two ways.

❒ It may be observed that the total heat evolved in carrying the reaction in two different ways is the same. The difference of 0.5 kcal is within the experimental error.
❒ It is obvious from the above examples that by the addition of a series of chemical equations we can obtain not only the resultant products of this series of reactions but also the net heat effect. It is, therefore, clear that : thermochemical equations may be multiplied, added or subtracted like ordinary algebraic equations. For this reason, Hess’s law has been of great service in the indirect determination of heats of formation

(1) Determination of heat of formation of substances which otherwise cannot be measured experimentally.

The substances like methane, carbon monoxide, benzene, etc., cannot be prepared by uniting their elements. Therefore it is not possible to measure the heats of formation of such compounds directly. These can be determined indirectly by using Hess’s law. This will be illustrated by the following examples.
Proplem (1): Calculate the heat of formation of potassium hydroxide from the following data. 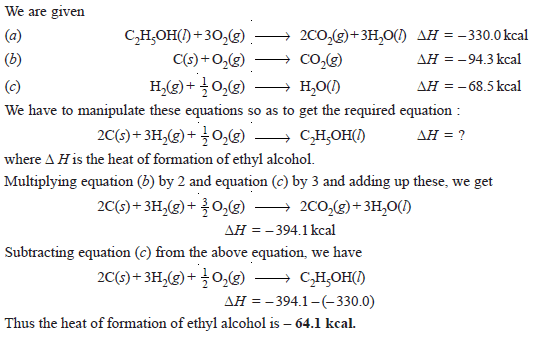 Proplem (3): Determine ΔH of the reaction:

from the following data :

(2) Determination of Heat of Transition

Subtracting equation (ii) from (i) we get:

Thus heat of transition of rhombic sulphur to monoclinic sulphur is 4.0 kJ.

(3) Determination of heats of various reactions

By using Hess’s law we can calculate the heats or enthalpies of many reactions which otherwise cannot be measured directly.
For example, from the following equations the enthalpy of dimerization of NO2 can be calculated.
Subtracting equation (i) from equation (ii) we have:

Thus the heat of dimerisation of NO2 is – 58.6 kJ.
Reference: Essentials of Physical Chemistry /Arun Bahl, B.S Bahl and G.D. Tuli / multicolour edition.