When a liquid is placed in an open vessel, it evaporates. The molecules in the liquid are moving with different kinetic energies.

The molecules that possess above-average kinetic energies can overcome the intermolecular forces that hold them in the liquid.

These energetic molecules escape from the liquid surface as vapour.

The process by which molecules of a liquid go into the gaseous state (vapours) is called Vaporization or Evaporation. 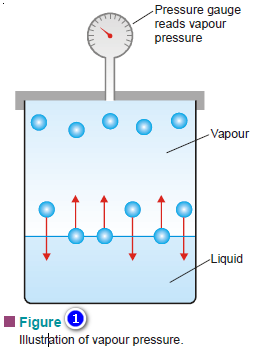 Now the concentration of the vapour in the space above the liquid will remain unchanged with lapse of time. Hence the vapour will exert a definite pressure at the equilibrium.

The vapour pressure of a liquid is defined as: the pressure exerted by the vapour in equilibrium with the liquid at a fixed temperature.

The vapour pressures of various liquids differ considerably, depending upon the identity of the liquid with its particular intermolecular forces.

Effect of Temperature on Vapour Pressure

If the temperature of the liquid is increased, the vapour pressure will increase.

This is so because at higher temperature more molecules in the liquid will have larger kinetic energy and will break away from the liquid surface. Therefore the concentration of vapour molecules will increase before the equilibrium is re-established. 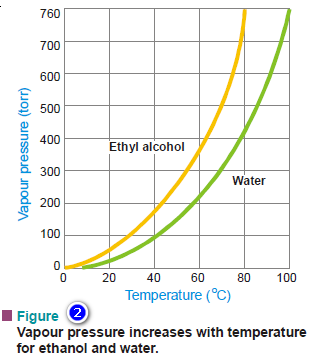 The vapour pressure of a given liquid can be measured by Static method or Dynamic method.

A simplified apparatus used for the static method is shown in Fig.3. 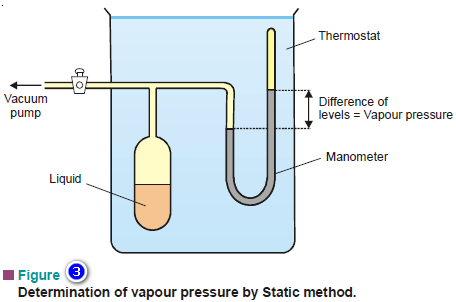 A sufficient amount of the liquid whose vapour pressure is to be determined is placed in the bulb connected to a mercury manometer and a vacuum pump.

All the air from the bulb is removed by working the vacuum pump and the stopcock closed. A part of the liquid evaporates.

The system is then maintained at a fixed temperature for enough time so that the equilibrium is established.

The apparatus used for the dynamic method is illustrated in Fig 4. 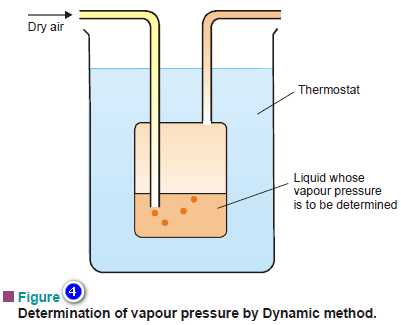 An inert gas is passed through the given liquid at a constant temperature (T). The gas saturated with the vapour of the liquid leaves the flask at the exit tube.

If Vbe the volume of the gas passed and m the loss in weight of the liquid, the vapour pressure is given by the expression

where M = molecular weight of the liquid and R = gas constant. This method is particularly suited for liquids of very low vapour pressure.

When a liquid is heated, tiny bubbles are formed in it. These rise to the liquid surface and burst.

The temperature at which it happens is the boiling point of the liquid. 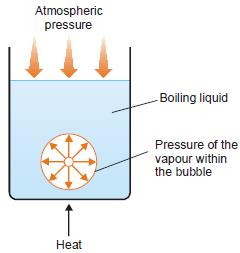 A domestic pressure cooker works on this principle. The pressure inside the cooker is maintained above one atmosphere and the liquid contained in it would boil at a higher temperature than 100ºC. Thus the food is cooked in a shorter time. 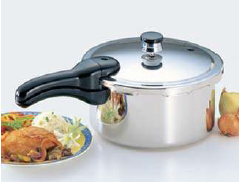