These forces are essentially electrical in nature and result from the attraction of charges of opposite sign.

The principal kinds of intermolecular attractions are: 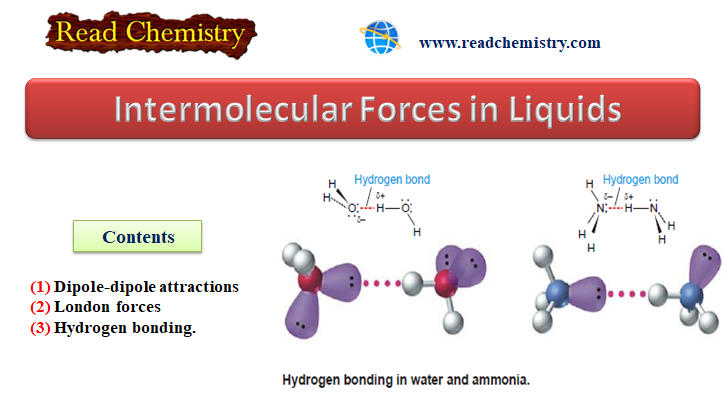 Covalent bonds are almost 200 times the strength of dipole-dipole forces, and more than 400 times the size of London dispersion forces.

Dipole-dipole attractions exist between molecules that are polar.

This requires the presence of polar bonds and an unsymmetrical molecule.

These molecules have a permanent separation of positive and negative charge. The temporary charges exist because the electrons in a molecule or ion move randomly in the structure.

The nucleus of one atom attracts electrons form the neighbouring atom.

These temporary charges in one molecule or atom attract opposite charges in nearby molecules or atoms.

A local slight positive charge (δ+) in one molecule will be attracted to a temporary slight negative charge (δ–) in a neighbouring molecule.

The temporary separations of charge that lead to the London force attractions are what attract one nonpolar organic molecule to its neighbours.

The possibilities for these interactions go up within creasing molecular size and surface.

The larger surface increases the chances for the (induced)charge separation.

If the molecules are linear they have more surface area than if they are folded into a sphere.

The linear molecules have higher melting and boiling points because of the increased attractions. 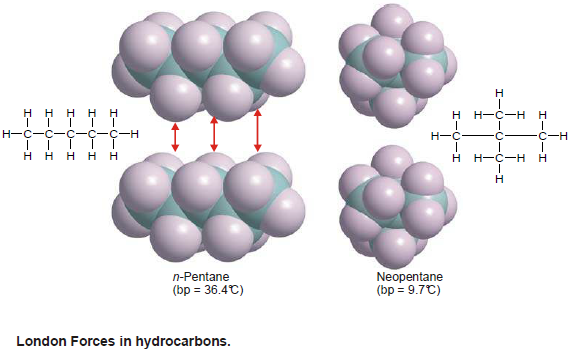 Hydrogen bonding is a unique type of intermolecular attraction.

There are two requirements:

(1) Covalent bond between an H atom and either F, O, or N. These are the three most

(2) Interaction of the H atom in this kind of polar bond with a lone pair of electrons on a nearby atom like F, O, or N. 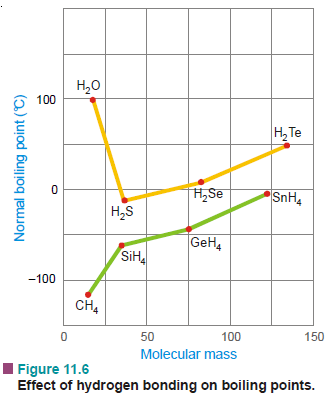 Hydrogen bonding is responsible for the expansion of water when it freezes. The water molecules in the solid state have tetrahedral arrangement for the two lone pairs and two single bonds radiating out from the oxygen. The lone pairs on the (O) atom can be attracted to nearby water molecules through hydrogen bonds. A cage like structure results. 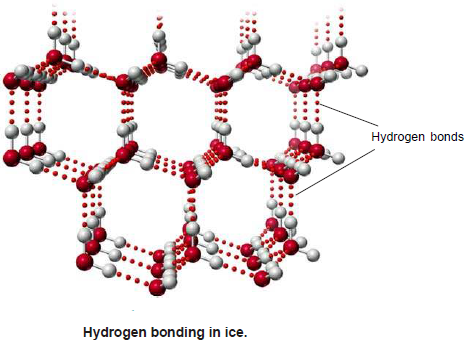 Summary of Types of Intermolecular Forces 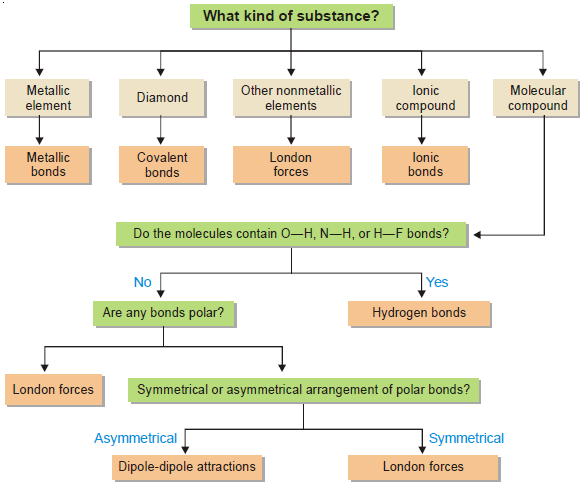