SOLUTIONS OF SOLIDS IN LIQUIDS

– Solutions of a solid substance in a solvent are most commonly met with.

– It is a common observation that polar solutes dissolve easily in polar solvents while they remain insoluble in non-polar solvents.

– For example, sodium chloride (an electrolyte) is fairly soluble in water which is highly polar solvent, while it is insoluble in a non polar solvent like chloroform.

– On the other hand, a non-polar solute does not dissolve in a polar solvent e.g., benzene which is non-polar is insoluble in water.

– The electrical attraction between the oppositely charged ends of the solute and the solvent molecules results to form a solution.

– Water being highly polar is one of the best solvents for ionised solutes.

– An ionic substance, when placed in water furnishes cations (+) and anions (–). These ions are surrounded by solvent molecules with their oppositely charged ends directed towards the ion.

– The ion enveloped by a layer of the solvent molecules in this manner, is called a Solvated ion or Hydrated ion in case water is the solvent. Thus sodium chloride dissolves in water to give Na+ and Cl– ions. 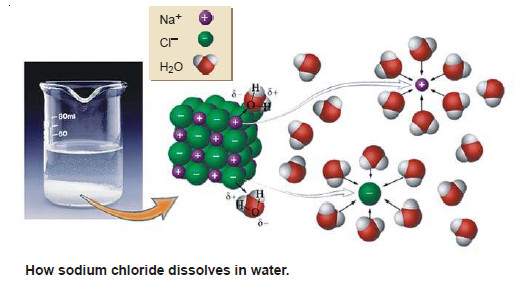 – It is customary to represent the hydrated sodium and chloride ions as Na+ (aq) and Cl– (aq). This representation indicates that the ions are in the aqueous phase.

The mechanism of solution of sodium crystal in water could be explained as follows:

– The polar water molecules try to pull out the Na+ and Cl– ions from the crystal by hydration.

– This becomes possible since the forces operating between the ion (Na+ or Cl–) and water molecules are strong enough to overcome the force binding the ion in the crystal.

– The ions detached from the crystal are now surrounded by cluster of water molecules.

– The layer of water molecules enveloping the ions effectively shields them and prevents them from coming in contact with each other. Thus they hardly aggregate into a crystal and remain in solution.

Dissolution Due to Hydrogen Bonding

– Many non-ionic substance such as sugar also dissolve in water. Here the dissolution is due to hydrogen bonding that occurs between water and sugar molecules.

– The hydrogen bonding takes place through the hydroxyl group of the sugar molecules.

– The water molecules are thus able to pull away the molecules of sugar from the crystal, which dissolve.

– In fact, every sugar molecule is surrounded by a number of water molecules, and these aggregates are free to migrate throughout the solution.

– When a solid is placed in a solvent, molecules or ions, as the case may be, break away from the surface and pass into the solvent.

– The particles of the solid thus detached are free to diffuse throughout the solvent to give a uniform solution.

– The solute and the solvent molecules are constantly moving about in the solution phase because of kinetic energy possessed by them.

– Some of the particles are deflected back towards the solid on account of collisions with other molecules. These then strike the solid surface and may get entangled in its crystal lattice and thus get deposited on it.

– This process by which the solute particles from solution are ‘redeposited’ or ‘recrystallised’ is often spoken of as recrystallisation or precipitation.

– In a solution in contract with solid solute, therefore, two opposing processes are operating simultaneously :

The particles of the solute leaving the solid and passing into solution.

The particles of the solute returning from the solution and depositing (or precipitating) on the solid.

– As the number of particles of the solute in solution increases, the rate at which they are returned to the solid also increases.

– Eventually, if there is excess of solid present the rate of dissolution and the rate of recrystallisation become equal.

– At this stage, a state of equilibrium between the molecules of the solute in solution and the solid solute is said to have been reached.

Henceforth neither the amount of the solute in solution nor the solid phase present in contact with it, will change with lapse of time.

– This equilibrium state will remain so, provided the ‘kinetic energy’ of the molecules is not changed by a change in temperature. The situation is illustrated Fig. 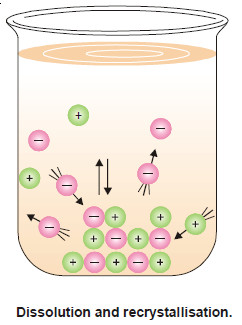 – The term dynamic refers to the fact that both the processes are occurring continuously but due to the equality of the two rates (equilibrium) no net change in the amount of the solute in solution phase occurs with the passage of time.

– The dynamic nature of solubility equilibrium can be demonstrated by putting a crystal of sugar having a hole in the surface, in a solution of sugar which has already attained the state of equilibrium. It will be seen that after some time the hole is filled with solid sugar and the concentration of the solution remains unchanged. This is explained by saying that the molecules from the solution get settled in the hole (process of crystallisation) while some molecules from other parts of the crystal go into the solution (process of dissolution), thereby changing the shape of the crystal.

where kd may be called the dissolution constant. Its value is characteristic of a particular system and its value depends on temperature.

The rate of recrystallisation (Rr) is the rate at which the solute molecules return to the crystal surface from solution and are deposited on it. This is determined by two factors :

The larger the area, the greater the number of molecules settling on it;

(b) the concentration C of the solute molecules in solution;

The higher the number of solute molecules in solution, the greater their number settling down.

where kr may be called the recrystallisation constant. Its value is also characteristic of a system and depends upon temperature.

– Hence the concentration of solute at equilibrium state in the solution is constant for a particular solvent and at a fixed temperature.

– The solution thus obtained is called a ‘Saturated solution’ of the solid substance and the concentration of this solution is termed its ‘Solubility’.

Thus a saturated solution is defined as one which is in equilibrium with the excess of solid at a particular temperature.

The solubility is defined as the concentration of the solute in solution when it is in equilibrium with the solid substance at a particular temperature.

– The solubility of a substance is determined by preparing its saturated solution and then finding the concentration by evaporation or a suitable chemical method.

– Saturated solution of a solid substance may be prepared by shaking excess of it with the solvent in a vessel placed in a constant temperature bath and filtering the clear solution.

– A known volume of this saturated solution is evaporated in a china dish and from the weight of the residue the solubility can easily be calculated. This method though simple, does not yield accurate results.

– During filtration, cooling would take place and thus some solid may be deposited on the filter paper or in the stem of the funnel. However, this method is quite good for the determination of solubility at room temperature.

– The evaporation of a liquid is a highly undesirable operation as it is not possible to avoid loss of the liquid caused by spurting. This difficulty can, however, be overcome whenever a chemical method of analysis is available.

– Another defect in this method is that it takes a long time to establish the equilibrium between the solid and the solution so that the preparation of saturated solution by simple agitation with the solvent is delayed. This difficulty may be overcome by first preparing the saturated solution at a higher temperature and then to cool it to the desired temperature at which solubility is to be determined.

– A curve drawn between solubility and temperature is termed Solubility Curve.

– It shows the effect of temperature on the solubility of a substance. 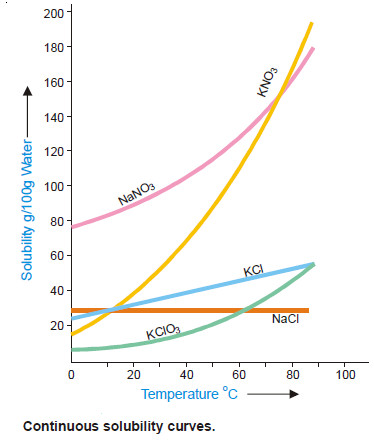 In case of CaSO4.2H2O, no doubt the curve first shows, a rise and then a fall but it remains continuous at the maximum point.

– In fact, at the break a new solid phase appears and another solubility curve of that new phase begins.

– The break in a solubility curve thus shows a point where the two different curves meet each other.

SOLUBILITY OF SOLIDS IN SOLIDS

– Solution of a solid in another solid can be prepared by melting them together and subsequent cooling of the mixture.

– For example, gold and silver when mixed together, melted and cooled, yield solid solutions which are perfectly homogeneous.

– Sometimes solid solutions may be obtained by simply pressing together the two metals and thus establishing better contact when one metal would diffuse into the other. Solutions of gold and lead have been obtained by this method.

– The study of solutions of solids in solids is of great practical importance in metallurgy.

– The formation of solid solutions is not limited to metals only. Organic substances like naphthalene and β-naphthol when melted together form the so-called mixed crystals on cooling which are a solid solution of one of them in the other. 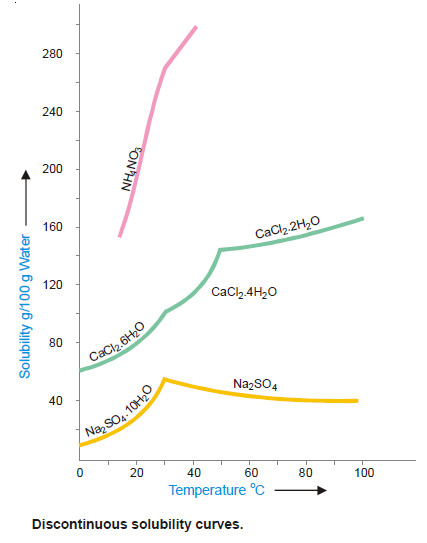 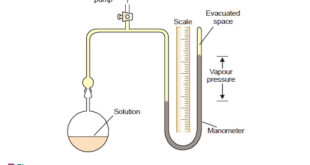 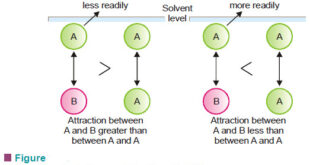 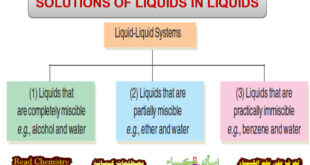 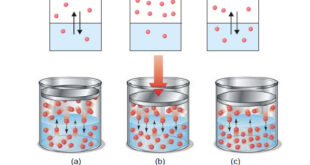 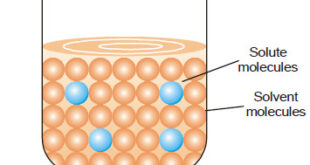 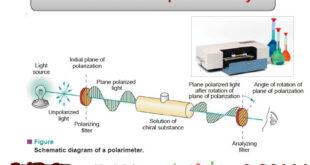