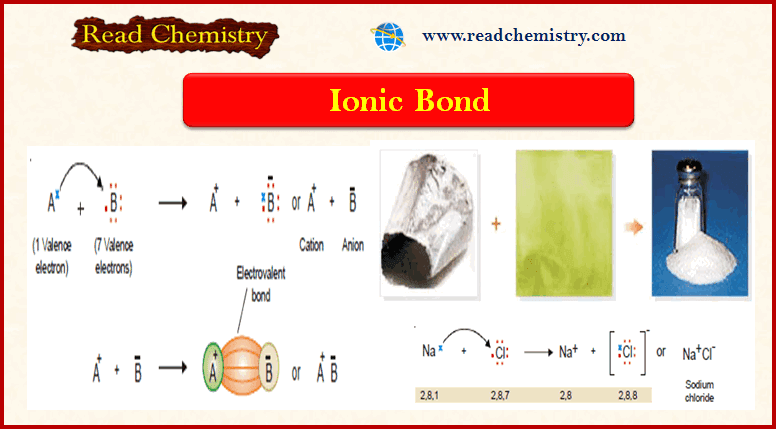 ** This type of bond is established by transfer of an electron from one atom to another.
** Let us consider a general case when an atom A has one electron in the valence shell and another atom B has seven electrons. A has one electron in excess and B has one electron short than the stable octet. Therefore, A transfers an electron to B and in this transaction both the atoms acquire a stable electronoctet.
** The resulting positive ion (cation) and negative ion (anion) are held together by electrostatic
attraction.

Conditions for formation of Ionic Bond

The conditions favourable for the formation of an ionic bond are:

** To form a stable ionic compound, there must be a net lowering of the energy. In other words energy must be released as a result of the electron transfer and formation of ionic compound by the following steps :
(a) The removal of electron from atom A (A – e– → A+) requires input of energy, which is the ionization energy (IE). It should be low.
(b) The addition of an electron to B (B + e– →B– ) releases energy, which is the electron affinity of B (EA). It should be high.
(c) The electrostatic attraction between A+ and B– in the solid compound releases energy, which is the electrical energy. It should also be high.
** If the energy released in steps (b) and (c) is greater than the energy consumed in step (a), the overall process of electron transfer and formation of ionic compound results in a net release of energy. Therefore, ionization of A will occur and the ionic bond will be formed. For example, in case of formation of sodium chloride (NaCl), we have:

(3) Electronegativity difference of A and B

** After the formation of cations and anions separately, they combine to form ionic compound.

** In this process, energy is released. It is called Lattice Energy. It may be defined as “the amount of energy released when one mole of an ionic compound is formed from its cations and anions.”
** Greater the lattice energy, greater the strength of ionic bond. The value of lattice energy depends upon the following two factors:
(a) Size of the ions
In order to have the greater force of attraction between the cations and anions their size should be small as the force of attraction is inversely proportional to the square of the distance between them.
(b) Charge on Ions
** Greater the charge on ions greater will be the force of attraction between them and, therefore, greater will be the strength of the ionic bond.
** Necessary for the formation of an ionic bond between atoms A and B. Thus Na has electronegativity 0.9, while Cl has 3.0. Since the difference is (3.0 – 0.9) = 2.1, Na and Cl will form an ionic bond.

Some examples of Ionic compounds

Here we will discuss the formation of Lewis formula or Electron dot formula of some binary ionic compounds, for illustration.

** A simple sodium chloride molecule is formed from an atom of sodium (Na) and one atom of
chlorine (Cl).
** Na (2, 8, 1) has one valence electron, while Cl (2, 8, 7) has seven. Na transfers its valence electron to Cl, and both achieve stable electron octet. Thus Na gives Na+ and Cl gives Cl– ion, and the two are joined by an ionic bond.

** Ionic Compounds Exist as Crystals. The (+) and (–) ions attract each other with electrostatic force that extends in all directions. This means that ions will be bonded to a number of oppositely charged ions around them. Therefore in solid state, single ionic molecules do not exist as such.
** Rather many (+) and (–) ions are arranged systematically in an alternating cation-anion pattern called the crystal lattice.
** The crystal lattice of NaCl is shown Figure. It will be noticed that here a large number of Na+ and Cl– ions are arranged in an orderly fashion so as to form a cubic crystal. Each Na+ ion is surrounded by 6 Cl– ions and each Cl– ion is surrounded by 6 Na+ ions. This makes a network of Na+ and Cl– ions which are tightly held together by electrostatic forces between them.
** Although discrete molecules Na+Cl– do not exist in the solid form of ionic compounds, independent molecules do exist in the vapour form of such compounds. 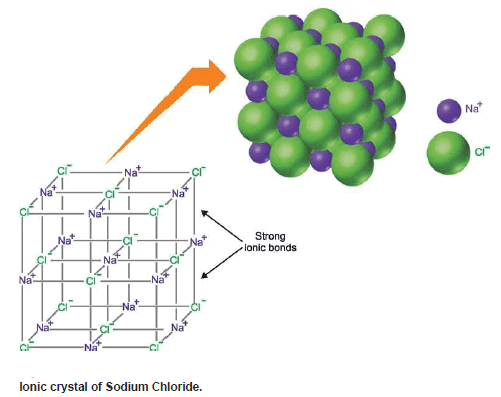 ** Magnesium (Mg) has two valence electrons, while chlorine (Cl) has seven.
** The magnesium atom transfers its two electrons, one to each chlorine atom, and thus all the three atoms achieve the stable octet.
** In this way Mg atom gives Mg2+ ion and the two Cl atoms give 2Cl1–, forming Mg+2 Cl21- (or MgCl2). The ionic compounds are made of (+) and (–) ions held by electrostatic forces in a crystal lattice. Each ion is surrounded by the opposite ions in alternate positions in a definite order in all directions. This explains the common properties of ionic compounds.
(1) Solids at Room Temperature
On account of strong electrostatic forces between the opposite ions, these ions are locked in
their allotted positions in the crystal lattice. Since they lack the freedom of movement characteristic of the liquid state, they are solids at room temperature.
(2) High Melting Points
** Ionic compounds have high melting points (or boiling points). Since the (+) and (–) ions are tightly held in their positions in the lattice, only at high temperature do the ions acquire sufficient kinetic energy to overcome their attractive forces and attain the freedom of movement as in a liquid.
** Thus ionic compounds need heating to high temperatures before melting.
(3) Hard and brittle
** The crystals of ionic substances are hard and brittle. Their hardness is due to the strong electrostatic forces which hold each ion in its allotted position. These crystals are made of layers of (+) and (–) ions in alternate positions so that the opposite ions in the various parallel layers lie over each other.
** When external force is applied to a layer of ions , with respect to the next, even a slight shift brings the like ions in front of each other. The (+) and (–) ions in the two layers thus repel each other and fall apart. The crystal cleaves here.

(4) Soluble in water
** When a crystal of an ionic substance is placed in water, the polar water molecules detach the (+) and (–) ions from the crystal lattice by their electrostatic pull. These ions then get surrounded by water molecules and can lead an independent existence and are thus dissolved in water.
** By the same reason, non-polar solvents like benzene (C6H6) and hexane (C6H14) will not dissolve ionic compounds. 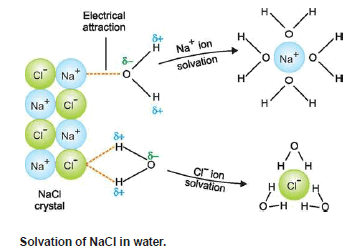 (5) Conductors of electricity
** Solid ionic compounds are poor conductors of electricity because the ions are fixed rigidly in their positions.
** In the molten state and in water solutions, ions are rendered free to move about. Thus molten ionic compounds or their aqueous solutions conduct a current when placed in an electrolytic cell.
(6) Do not exhibit isomerism
The ionic bond involving electrostatic lines of force between opposite ions, is non-rigid and nondirectional.The ionic compounds, therefore, are incapable of exhibiting stereoisomerism.
(7) Ionic reactions are fast

Ionic compounds give reactions between ions and these are very fast.

Comparison of Ionic and covalent bonds 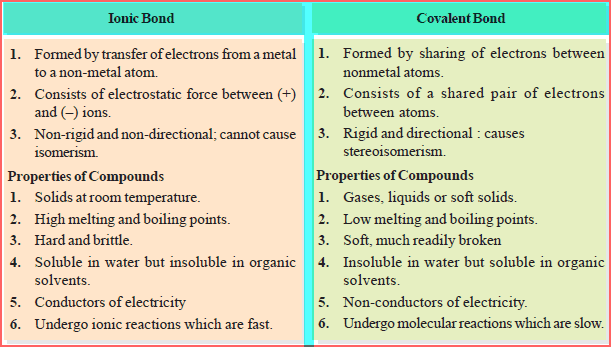