A process which proceeds of its own accord, without any outside assistance, is termed a spontaneous or natural process.

The reverse process which does not proceed on its own, is referred to as a nonspontaneous or unnatural process.

In general, the tendency of a process to occur naturally is called the spontaneity.

When two balls of metal, one hot and one cold, are connected, heat flows spontaneously from the hot ball to the cold one, never from cold to hot. It requires work to transfer heat from one place to the other, say, by means of refrigerator pump.

When a vessel containing a gas is connected to another evacuated vessel, the gas spreads throughout  spontaneously unless the pressure is the same in both the vessels. The reverse process of    the compressing the gas into the original vessel cannot occur unless work is done on it 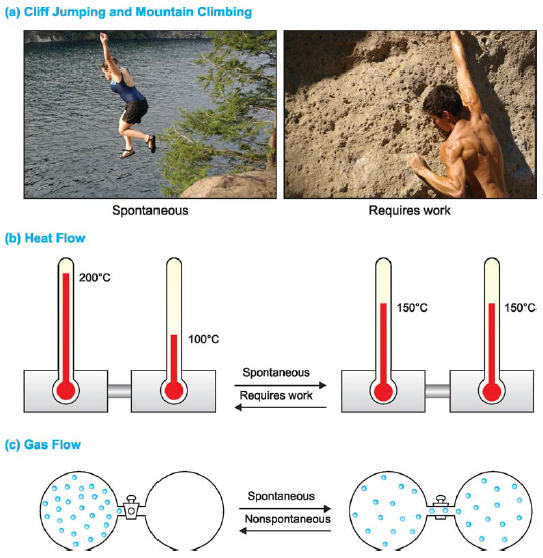 Some important criteria of spontaneous physical and chemical changes are listed below.

(1) A spontaneous change is one-way or unidirectional.

For reverse change to occur, work has to be done.

(2) For a spontaneous change to occur, time is no factor.

A spontaneous reaction may take place rapidly or very slowly.

(3) If the system is not in equilibrium state (unstable), a spontaneous change is inevitable.

The change will continue till the system attains the state of equilibrium.

(4)Once a system is in equilibrium state, it does not undergo any further spontaneous change in state if left undisturbed.

To take the system away from equilibrium, some external work must be done on the system

(5) A spontaneous change is accompanied by decrease of internal energy or enthalpy (ΔH).

It implies that only such reactions will occur which are exothermic. But the melting of ice and evaporation of rain water are endothermic processes which proceed spontaneously.

Clearly, there is some other factor in addition to ΔH which governs spontaneity. It is the second law of thermodynamics which introduces this new factor that is called entropy.

For many years scientists believed that only exothermic changes resulting in a lowering of internal energy or enthalpy could occur spontaneously. But melting of ice is an endothermic process and yet occurs spontaneously. On a warm day, ice melts by itself. 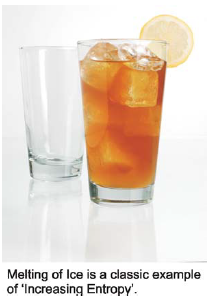 The evaporation of water is another example of a spontaneous endothermic process. Thus arose the need of inventing another driving force that affects the spontaneity. This was known as the entropy change, ΔS.

Careful examination shows that in each of the processes viz., melting of ice and evaporation of water, there is an increase in randomness or disorder of the system.

The movement of molecules becomes freer still when the water evaporates into space as now they can roam about throughout the entire atmosphere.

In other words, we can say that the randomness of the water molecules increases as ice melts into water or water evaporates into space.

We can see that the sequence of cards is certainly highly organized. Now, if we throw the cards into the air, collect them and re-stack them, we will almost surely find that they have been placed at random.

This is expected because when the cards are tossed, there are many ways for them to be disordered, while there is only one way for them to come together again in their original sequence.

Thus on the basis of pure chance a disordered sequence is far more probable than the ordered one with which we started. The same law of chance applies to any physical or chemical process. 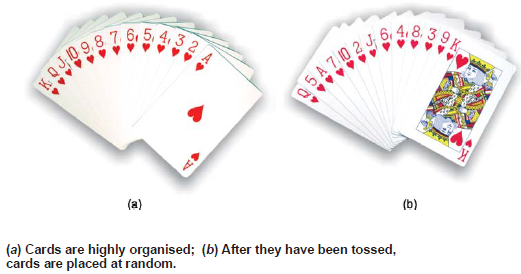 Entropy is a thermodynamic state quantity that is a measure of the randomness or disorder of the molecules of the system.

The symbol of entropy is S, while the change in disorder accompanying a process from start to completion is represented by ΔS.

The entropy of a system is a state function and depends only on the initial and final states of the system. The change in entropy, ΔS, for any process is given by the equation,

A process accompanied by an increase in entropy tends to be spontaneous. Let us consider a molecular system in states A and B (the following figure). In state A all the molecules are arranged and highly ordered, while in state B the molecules are present at random and it is highly disordered. 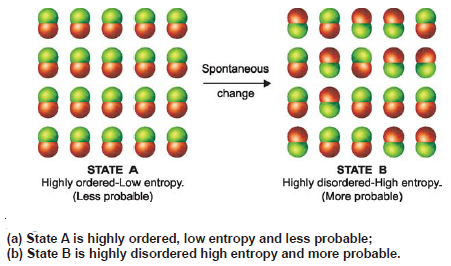 (1)By definition, the entropy of A is low and that of B high. Thus an increase of entropy occurs in the change from A to B.

(2) According to the law of chance (probability), A is less probable and B is more probable.

Therefore, the change from A to B is spontaneous.

(3) From (1) and (2), it follows that the change from A to B which is accompanied by increase of entropy will tend to be spontaneous.

Hence we can say, in general, that a change in a system which is accompanied by an increase in entropy, tends to be spontaneous.