– There are several methods available for the measurement of the elevation of boiling point.

– Some of these are outlined below :

This method was introduced by Landsberger and modified by Walker.

– The apparatus used in this method is shown in Fig. 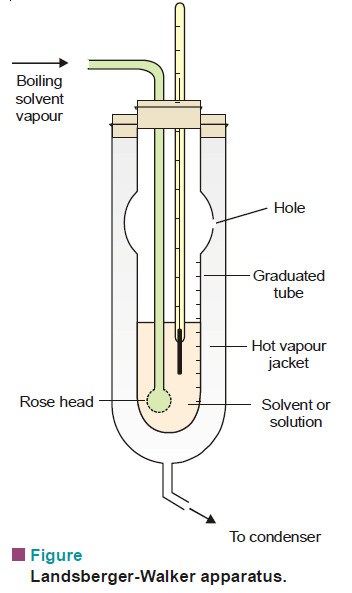 (i) An inner tube with a hole in its side and graduated in ml;

(iii) An outer tube which receives hot solvent vapour issuing from the side-hole of the inner tube;

(iv) A thermometer reading to 0.01 K, dipping in solvent or solution in the inner tube.

– Pure solvent is placed in the graduated tube and vapour of the same solvent boiling in a separate flask is passed into it.

– The vapour causes the solvent in the tube to boil by its latent heat of condensation.

– When the solvent starts boiling and temperature becomes constant, its boiling point is recorded.

– Now the supply of vapour is temporarily cut off and a weighed pellet of the solute is dropped into the solvent in the inner tube.

– The solvent vapour is again passed through until the boiling point of the solution is reached and this is recorded.

– From a difference in the boiling points of solvent and solution, we can find the molecular weight of the solute by using the expression:

A method better than Landsberger-Walker method was devised by Cottrell (1910).

(i) a graduated boiling tube containing solvent or solution;

(ii) a reflux condenser which returns the vapourised solvent to the boiling tube;

(iii) a thermometer reading to 0.01 K, enclosed in a glass hood;

(iv) A small inverted funnel with a narrow stem which branches into three jets projecting at the thermometer bulb. 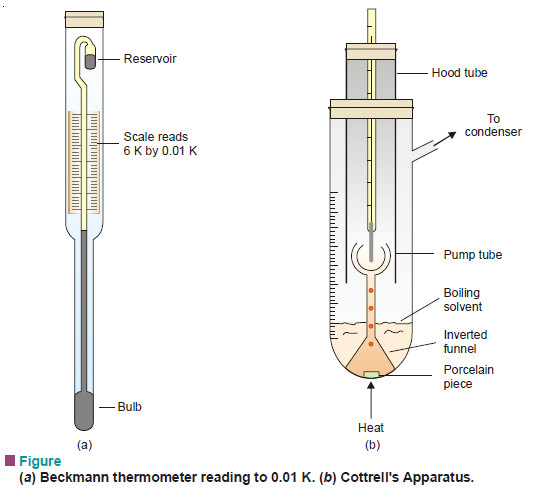 – It has a large bulb at the bottom of a fine capillary tube.

– The unique feature of this thermometer, however, is the small reservoir of mercury at the top.

– The amount of mercury in this reservoir can be decreased or increased by tapping the thermometer gently.

– In this way the thermometer is adjusted so that the level of mercury thread will rest at any desired point on the scale when the instrument is placed in the boiling (or freezing) solvent.

– The apparatus is fitted up as shown in Fig.(b).

-Solvent is placed in the boiling tube with a porcelain piece lying in it. It is heated on a small flame (micro burner).

– The temperature soon becomes constant and the boiling point of the pure solvent is recorded.

– The difference of the boiling temperatures of the solvent and solute gives the elevation of boiling point.

– While calculating the molecular weight of solute the volume of solution is converted into mass by multiplying with density of solvent at its boiling point.