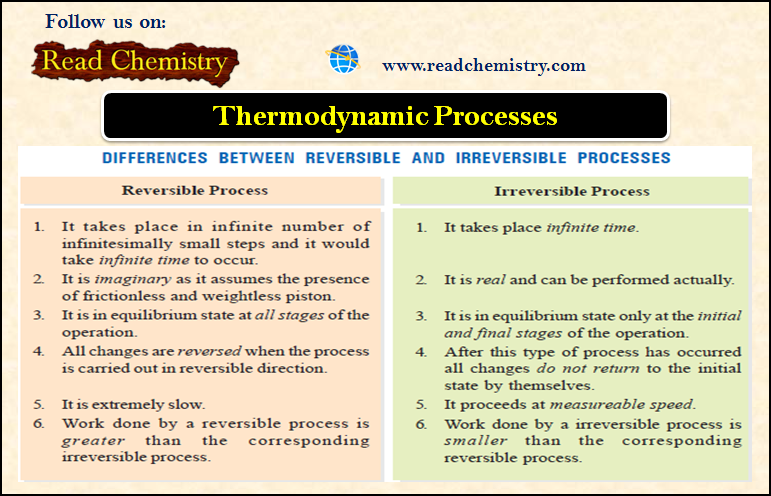 ❒ Those processes in which no heat can flow into or out of the system, are called adiabatic
processes.
❒ Adiabatic conditions can be approached by carrying the process in an insulated container such as ‘thermos’ bottle. High vacuum and highly polished surfaces help to achieve thermal insulation.
❒ For an adiabatic process dq = 0 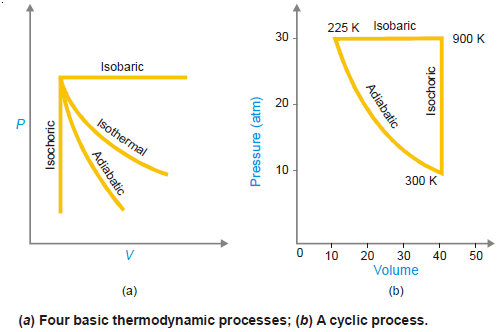 ❒ When a system in a given state goes through a number of different processes and finally returns to its initial state, the overall process is called a cycle or cyclic process.
❒ For a cyclic process dE = 0, dH = 0.

❒ A thermodynamic reverse process is one that takes place infinitesimally slowly and its direction at any point can be reversed by an infinitesimal change in the state of the system.
❒ In fact, a reversible process is considered to proceed from the initial state to the final state through an infinite series of infinitesimally small stages.
❒ At the initial, final and all intermediate stages, the system is in equilibrium state. This is so because an infinitesimal change in the state of the system at each intermediate step is negligible.
❒ When a process goes from the initial to the final state in a single step and cannot be carried in the reverse order, it is said to be an irreversible process.
❒ Here the system is in equilibrium state in the beginning and at the end, but not at points in between. Consider a certain quantity of a gas contained in a cylinder having a weightless and frictionless piston. The expansion of the gas can be carried by two methods illustrated in the following figure: 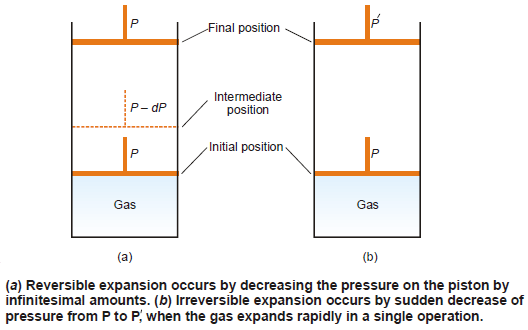 ❒ Let the pressure applied to the piston be P and this is equal to the internal pressure of the gas. Since the external and internal pressures are exactly counterbalanced, the piston remains stationary and there is no change in volume of the gas. Now suppose the pressure on the piston is decreased by an infinitesimal amount dP. Thus the external pressure on the piston being P – dP , the piston moves up and the gas will expand by an infinitesimal small amount. The gas will, therefore, be expanded infinitely slowly i.e., by a thermodynamically reversible process. At all stages in the expansion of the gas, dP being negligibly small the gas is maintained in a state of equilibrium throughout. If at any point of the process the pressure is increased by dP, the gas would contract reversibly.
❒ On the other hand, the expansion is irreversible in the figure above (b) if the pressure on the piston is decreased suddenly. It moves upward rapidly in a single operation. The gas is in equilibrium state in the initial and final stages only. The expansion of the gas, in this case, takes place in an irreversible manner. 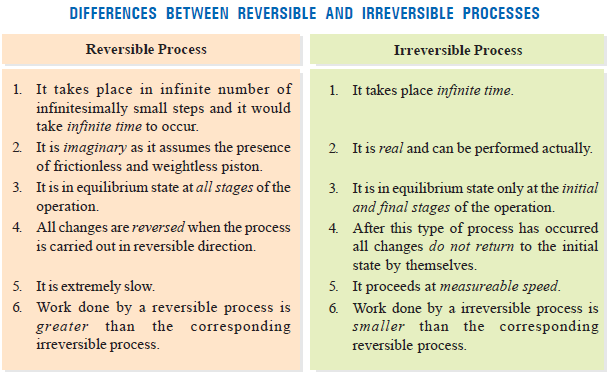