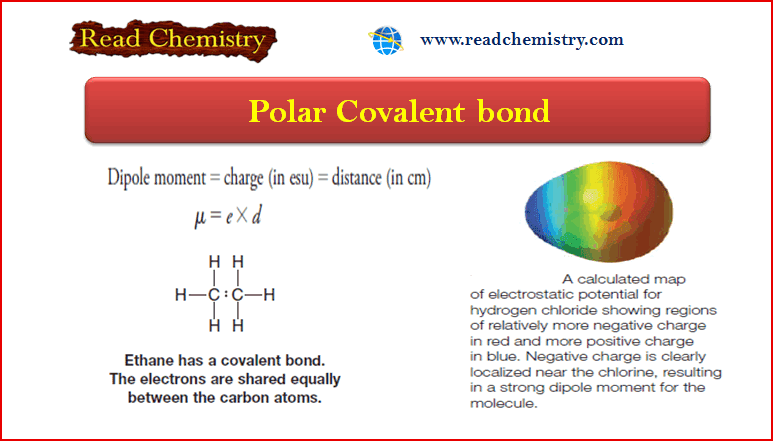 ** Covalent bonds form by sharing of electrons between atoms of similar electronegativities to achieve the configuration of a noble gas.
** If we have a compounds such as LiF in which the bond is between two atoms with very large electronegativity differences. In instances like these, a complete transfer of electrons occurs, giving the compound an ionic bond. 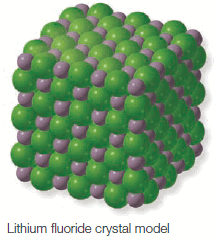 ** We also described molecules in which electronegativity differences are not large, or in which they are the same, such as the carbon–carbon bond of ethane. Here the electrons are shared equally between the atoms. 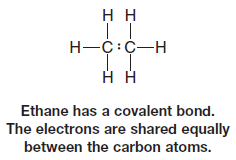 ** An example of such a polar covalent bond is the one in hydrogen chloride.
** The chlorine atom, with its greater electronegativity, pulls the bonding electrons closer to it. This makes the hydrogen atom somewhat electron deficient and gives it a partial positive charge (δ+). The chlorine atom becomes somewhat electron rich and bears a partial negative charge (δ-):

** In HCl, for example, we would indicate the direction of the dipole moment in the following way:

** For convenience, this unit, 1 × 10-18 esu cm, is defined as one debye and is abbreviated (D). (The unit is named after Peter J. W. Debye, a chemist born in the Netherlands and who taught at Cornell University from 1936 to 1966. Debye won the Nobel Prize in Chemistry in 1936.)
** In SI units 1 D = 3.336 × 10-30 coulomb meter (C . m).
** If necessary, the length of the arrow can be used to indicate the magnitude of the dipole moment.
** Dipole moments are very useful quantities in accounting for physical properties of compounds.

** One way to visualize the distribution of charge in a molecule is with a map of electrostatic potential (MEP).
(1) Regions of an electron density surface that are more negative than others in an MEP are colored red. These regions would attract a positively charged species (or repel a negative charge).
(2) Regions in the MEP that are less negative (or are positive) are blue. Blue regions are likely to attract electrons from another molecule.
(3) The spectrum of colors from red to blue indicates the trend in charge from most negative to least negative (or most positive). 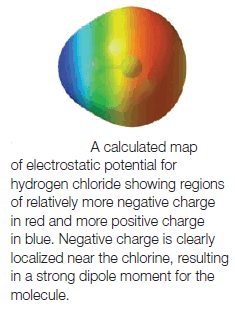 Figure (1) shows a map of electrostatic potential for the low-electron-density surface of hydrogen chloride. We can see clearly that:
** negative charge is concentrated near the chlorine atom and that positive charge is localized near the hydrogen atom, as we predict based on the difference in their electronegativity values.
** Furthermore, because this MEP is plotted at the low-electron-density surface of the molecule (the van der Waals surface) it also gives an indication of the molecule’s overall shape.
Reference: Organic chemistry / T.W. Graham Solomons , Craig B.Fryhle , Scott A.snyder , / ( eleventh edition) / 2014.