– In this subject we will learn how to predict the the mechanisms of SN1, SN2, E1, E2 reactions 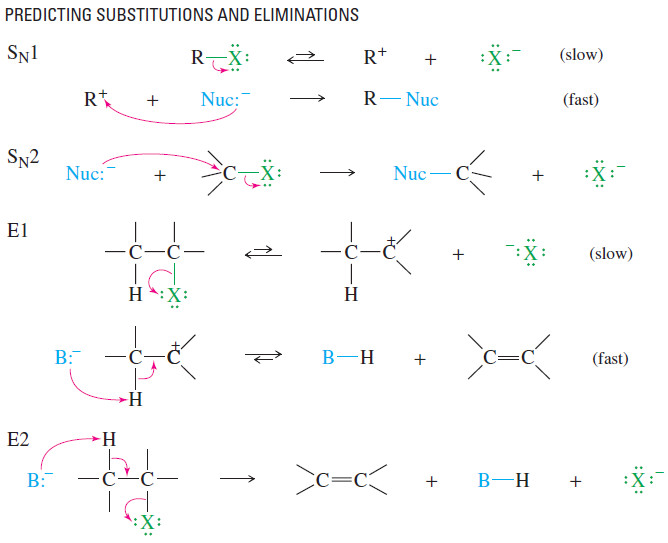 – Given a set of reagents and solvents, how can we predict what products will result and which mechanisms will be involved?

– Should you memorize all this theory about substitutions and eliminations? Students sometimes feel overwhelmed at this point.

– Memorizing is not the best way to approach this material because the answers are not absolute and too many factors are involved.

– Besides, the real world with its real reagents and solvents is not as clean as our equations on paper.

– We will review the most important factors that determine the reaction pathway and organize them in a sequence that allows you to predict as much as can be predicted.

– The first principle you must understand is that we cannot always predict one unique product or one unique mechanism.

– Often, the best we can do is to eliminate some of the possibilities and make some good predictions.

– Remembering this limitation, here are some general guidelines:

(1) The strength of the base or nucleophile determines the order of the reaction.

– If a strong nucleophile (or base) is present, it will force second-order kinetics, either SN2 or E2.

– A strong nucleophile attacks the electrophilic carbon atom or abstracts a proton faster than the molecule can ionize for first-order reactions.

– If no strong base or nucleophile is present, the fastest reaction will probably be a firstorder reaction, either SN1 or E1.

– Addition of silver salts to the reaction can force some difficult ionizations.

– Unless they are resonance-stabilized, primary halides rarely undergo first-order reactions, because primary carbocations are relatively unstable.

– With good nucleophiles, SN2 substitution is usually observed. With a strong base, E2 elimination may also be observed.

– Sometimes silver salts or high temperatures are used to force a primary halide to ionize, usually with rearrangement to give a more stable carbocation. In such a case, the rearranged SN1 and E1 products may be observed.

(3) Tertiary halides usually undergo the E2 reaction (strong base) or a mixture of SN1 and E1 (weak base).

– A strong base forces second-order kinetics, resulting in elimination by the E2 mechanism.

– In the absence of a strong base, tertiary halides react by first-order processes, usually a mixture of SN1 and E1.

– The specific reaction conditions determine the ratio of substitution to elimination. 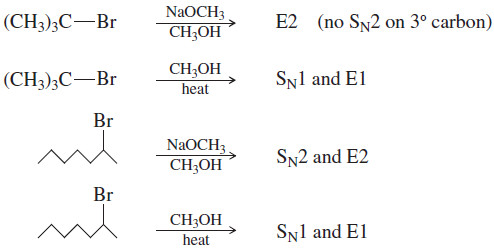 (4) The reactions of secondary halides are the most difficult to predict.

– With a strong base, either the SN2 or the E2 reaction is possible.

– With a weak base and a good ionizing solvent, either the SN1 or the E1 reaction is possible. Mixtures of products are common.

– The following figure shows these possibilities with a secondary halide under secondorder and first-order conditions.

(5) Some nucleophiles and bases favor substitution or elimination.

– To promote elimination, the base should readily abstract a proton but not readily attack a carbon atom.

– A bulky strong base, such as tert-butoxide [–OC(CH3)3], enhances elimination.

– Higher temperatures also favor elimination in most cases, because more molecules are formed, and Δ S < 0.

– To promote substitution, we need a good nucleophile with limited basicity: a highly polarizable species that is the conjugate base of a strong acid.

– Bromide (Br–) and iodide (I–) are examples of good nucleophiles that are weak bases and favor substitution.

Predict the mechanisms and products of the following reactions:

(a) There is no strong base or nucleophile present, so this reaction must be first order, with an ionization of the alkyl halide as the slow step.

– Deprotonation of the carbocation gives either of two elimination products, and nucleophilic attack gives a substitution product 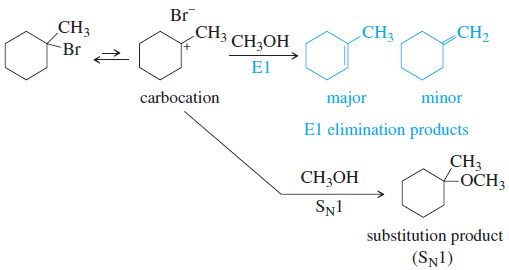 (b) This reaction takes place with a strong base, so it is second order.

– This secondary halide can undergo both SN2 substitution and E2 elimination.

– Both products will be formed, with the relative proportions of substitution and elimination depending on the reaction conditions.