Comparison of E1 and E2 reactions

– Let’s summarize the major points to remember about the E1 and E2 reactions, focusing on the factors that help us predict which of these mechanisms will operate under a given set of experimental conditions. Then we will organize these factors into a short table.

– The nature of the base is the single most important factor in determining whether an elimination will go by the E1 or E2 mechanism.

– If no strong base is present, then a good solvent makes a unimolecular ionization likely.

– Subsequent loss of a proton to a weak base (such as the solvent) leads to elimination.

– Under these conditions, the E1 reaction usually predominates, usually accompanied by the SN1

(2) Effect of the Solvent on E1 and E2 reactions

– The slow step of the E1 reaction is the formation of two ions.

– Like the SN1, the E1 reaction critically depends on polar ionizing solvents such as water and the alcohols.

– In the E2 reaction, the transition state spreads out the negative charge of the base over the entire molecule.

– There is no more need for solvation in the E2 transition state than in the reactants.

– The E2 is therefore less sensitive to the solvent; in fact, some reagents are stronger bases in less polar solvents.

E2: Solvent polarity is not so important.

(3) Effect of the Substrate on E1 and E2 reactions

– For both the E1 and the E2 reactions, the order of reactivity is

– In the E1 reaction, the rate-limiting step is formation of a carbocation, and the reactivity order reflects the stability of carbocations.

– The rate of the E2 reaction is proportional to the concentrations of both the alkyl halide [RX] and the base [B:–] . It follows a second-order rate equation.

– In most E1 and E2 eliminations with two or more possible products, the product with the most substituted double bond (the most stable product) predominates.

– This principle is called Zaitsev’s rule, and the most highly substituted product is called the Zaitsev product.

(6) Stereochemistry of E1 and E2 reactions

– The E1 reaction begins with an ionization to give a flat carbocation.

– No particular geometry is required for ionization

– The E2 reaction takes place through a concerted mechanism that requires a coplanar arrangement of the bonds to the atoms being eliminated.

– The transition state is usually anti-coplanar, although it may be syn-coplanar in rigid systems.

E1: No particular geometry required for the slow step.

– This intermediate can rearrange, usually by the shift of a hydride or an alkyl group, to give a more stable carbocation.

– The E2 reaction takes place in one step with no intermediates.

– No rearrangement is possible in the E2 reaction. 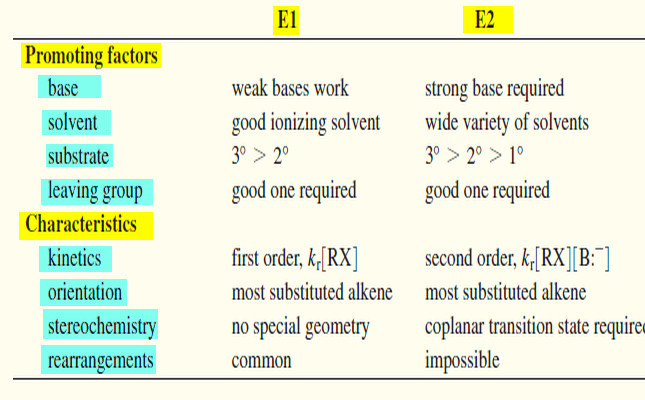