Some Important Units of Measurement in Analytical Chemistry 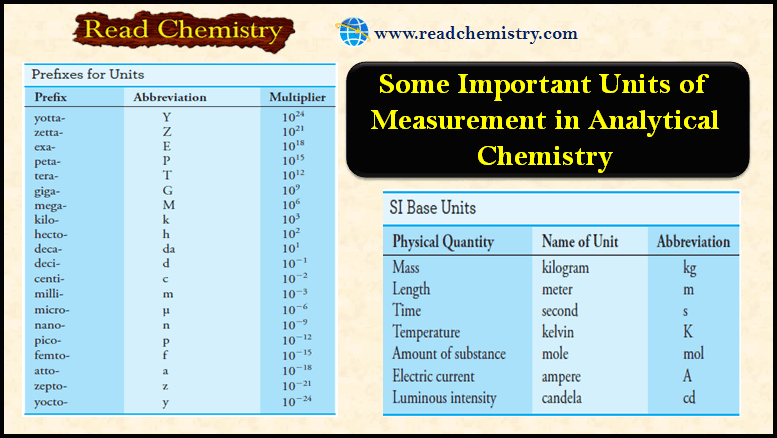 ** Scientists throughout the world have adopted a standardized system of units known as the International System of Units (SI).
** This system (SI) is based on the seven fundamental base units shown in Table (1).
** Numerous other useful units, such as volts, hertz, coulombs, and joules, are derived from these base units.
** To express small or large measured quantities in terms of a few simple digits, prefixes are used with these base units and other derived units.
** As shown in Table (2), these prefixes multiply the unit by various powers of 10.
** For example, the wavelength of yellow radiation used for determining sodium by flame photometry is about 5.9 × 10-7 m, which can be expressed more compactly as 590 nm (nanometers); the volume of a liquid injected onto a chromatographic column is often roughly 50 × 10-6 L, or 50 μL (microliters); or the amount of memory on some computer hard disks is about 20 × 109 bytes, or 20 Gbytes (gigabytes)
** In analytical chemistry, we often determine the amount of chemical species from mass measurements.
** For mass measurements, metric units of kilograms (kg), grams (g), milligrams (mg), or micrograms (μg) are used.
** Volumes of liquids are measured in units of liters (L), milliliters (mL), microliters (μL), and sometimes nanoliters (nL). The liter, the SI unit of volume, is defined as exactly 10-3 m3. The milliliter is defined as 10-6 m3, or 1 cm3.
Note: The ångstrom unit Å is a non-SI unit of length that is widely used to express the wavelength of very short radiation such as X-rays (1 Å = 0.1 nm = 10-10 m). Thus, typical X-radiation lies in the range of 0.1 to 10 Å.

The Distinction Between Mass and Weight

** It is important to understand the difference between mass and weight.
** Mass is an invariant measure of the quantity of matter in an object.
** Weight is the force of attraction between an object and its surroundings, principally the earth. Because gravitational attraction varies with geographical location, the weight of an object depends on where you weigh it.
** For example, a crucible weighs less in Denver than in Atlantic City (both cities are at approximately the same latitude) because the attractive force between the crucible and the earth is smaller at the higher altitude of Denver. Similarly, the crucible weighs more in Seattle than in Panama (both cities are at sea level) because the Earth is somewhat flattened at the poles, and the force of attraction increases measurably with latitude. The mass of the crucible, however, remains constant regardless of where you measure it.
** Weight and mass are related by the familiar expression:
w = mg
where w is the weight of an object, m is its mass, and g is the acceleration due to
gravity.
** A chemical analysis is always based on mass so that the results will not depend on locality.
** A balance is used to compare the mass of an object with the mass of one or more standard masses. Because g affects both unknown and known equally, the mass of the object is identical to the standard masses with which it is compared.
** The distinction between mass and weight is often lost in common usage, and the process of comparing masses is usually called weighing. In addition, the objects of known mass as well as the results of weighing are frequently called weights.
** Always bear in mind, however, that analytical data are based on mass rather than weight. Therefore, we will use mass rather than weight to describe the quantities of substances or objects.
** On the other hand, for lack of a better word, we will use “weigh” for the act of determining the mass of an object. Also, we will often say “weights” to mean the standard masses used in weighing.
Note: Mass m is an invariant measure of the quantity of matter. Weight w is the force of gravitational attraction between that matter and Earth.

** The mole (abbreviated mol) is the SI unit for the amount of a chemical substance. It is always associated with specific microscopic entities such as atoms, molecules, ions, electrons, other particles, or specified groups of such particles as represented by a chemical formula.
** It is the amount of the specified substance that contains the same number of particles as the number of carbon atoms in exactly 12 grams of 12C. This important number is Avogadro’s number NA = 6.022 × 1023.
** The molar mass M of a substance is the mass in grams of 1 mole of that substance.
** We calculate molar masses by summing the atomic masses of all the atoms appearing in a chemical formula. For example, the molar mass of formaldehyde CH2O is: 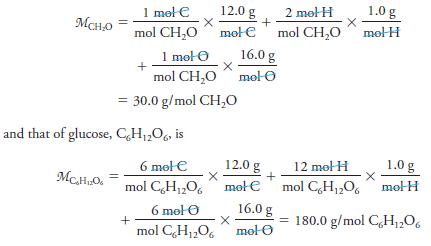 Calculating the Amount of a Substance in Moles or Millimoles

** The two examples that follow illustrate how the number of moles or millimoles of a species can be determined from its mass in grams or from the mass of a chemically related species.
Example (1):Find the number of moles and millimoles of benzoic acid (M = 122.1 g/mol) that are contained in 2.00 g of the pure acid.
Solution:
If we use HBz to represent benzoic acid, we can write that 1 mole of HBz has a mass of 122.1 g. Therefore,

To obtain the number of millimoles, we divide by the millimolar mass (0.1221 g/mmol), that is,

To find the number of moles of Na2SO4

Combining this equation with the first leads to:

Substituting the previous equation gives the mass in grams of Na+:

Share
Previous Safety in the laboratory
Next Nuclear Fission Process 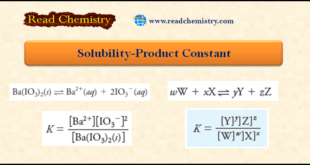