Rate of radioactive decay and calculation of Half-life time 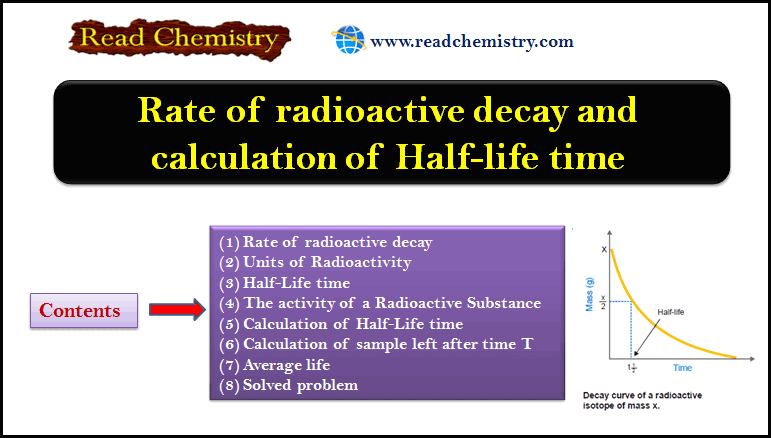 ** The decay of a radioactive isotope takes place by disintegration of the atomic nucleus. It is not influenced by any external conditions. Therefore the rate of decay is characteristic of an isotope and depends only on the number of atoms present.

** If N be the number of undecayed atoms of an isotope present in a sample of the isotope, at time t,

where  – dN/dt means the rate of decrease in the number of radioactive atoms in the sample; and λ is the proportionality factor. This is known as the decay constant or disintegration constant. Putting dt = 1 in equation (1) we have:

** Thus decay constant may be defined as the proportion of atoms of an isotope decaying per second. 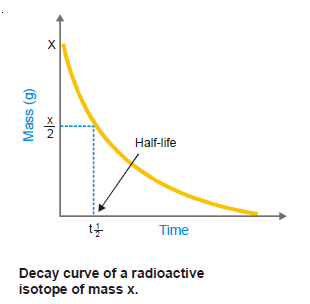 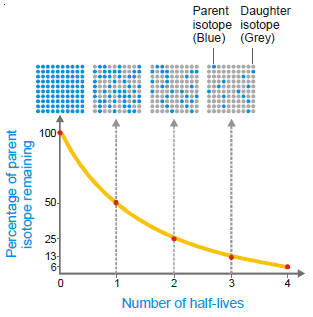 The activity of a Radioactive Substance

** It is defined as the rate of decay or the number of disintegrations per unit time.
** The activity of a sample is denoted by A. It is given by the expression: 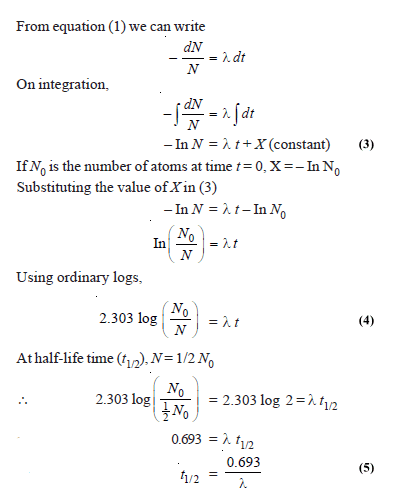 The value of λ can be found experimentally by finding the number of disintegrations per second with the help of a Geiger-Muller counter. Hence, half-life of the isotope concerned can be calculated by using the relation (5).

** It follows from equation (4) stated earlier that

** In a radioactive substance, some atoms decay earlier and others survive longer.
** The statistical average of the lives of all atoms present at any time is called the Average life. It is denoted by the symbol τ and has been shown to be reciprocal of decay constant, λ.

** The average life of a radioactive element is related to its half-life by the expression:

Problem (2): Calculate the disintegration constant of cobalt 60 if its half-life to produce nickel–60 is 5.2 years.
Solution:

Problem (3): The half-life period of radon is 3.825 days. Calculate the activity of radon. (atomic weight of radon = 222)
Solution:
we know that:
dN = λN
where dN is the number of atoms disintegrating per second, λ is the decay constant and N is
the number of atoms in the sample of radon.

Hence the fraction remaining after 15 years is 0.14 or 14 per cent of that present originally.
Problem (5): How much time would it take for a sample of cobalt-60 to disintegrate to the extent that only 2.0 per cent remains ? The disintegration constant λ is 0.13 yr– 1.
Solution: 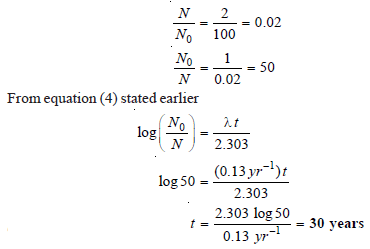 Problem (6): A sample of radioactive 133 I gave with a Geiger counter 3150 counts per minute at a certain time and 3055 counts per unit exactly after one hour later. Calculate the half life period of 133I. 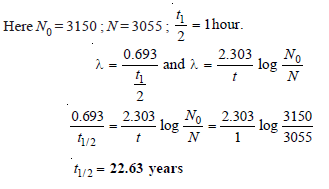