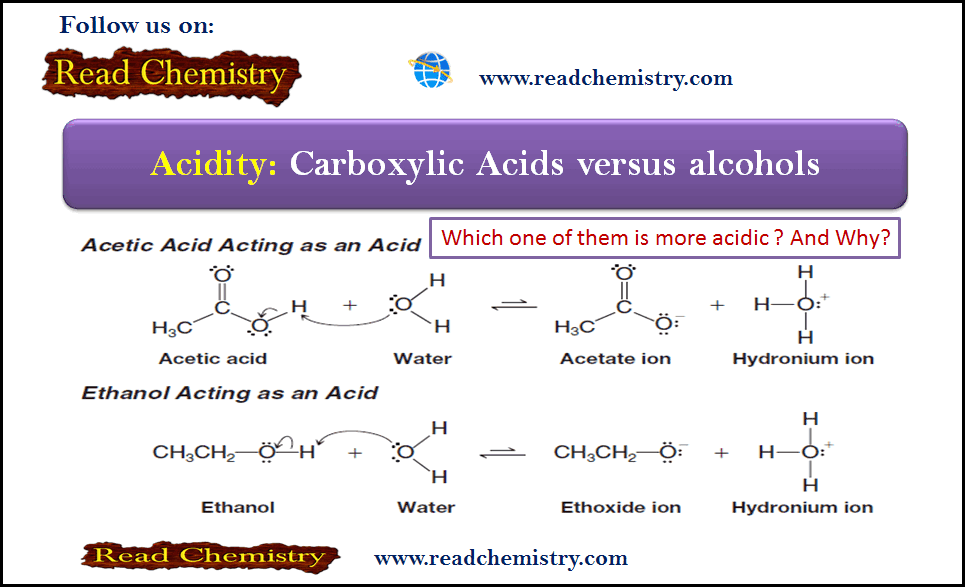 ❒ Carboxylic acids are weak acids, typically having pKa values in the range of 3–5. Alcohols, by comparison, have pKa values in the range of 15–18, and essentially do not give up a proton unless exposed to a very strong base.
❒ To understand the reasons for this difference, let’s consider acetic acid and ethanol as representative examples of simple carboxylic acids and alcohols.

❒ Using the pKa for acetic acid (4.75), one can calculate that the free energy change (∆Go) for ionization of the carboxyl proton of acetic acid is +27 kJ mol-1, a moderately endergonic (unfavorable) process, since the (∆Go)  value is positive. Using the pKa of ethanol (16), one can calculate that the corresponding free-energy change for ionization of the hydroxyl proton of ethanol is +90.8 kJ mol-1, a much more endergonic (and hence even less favorable) process.
❒ These calculations reflect the fact that ethanol is much less acidic than acetic acid. Figure (1) depicts the magnitude of these energy changes in a relative sense.

❒ How do we explain the much greater acidity of carboxylic acids than alcohols?
❒ Consider first the structural changes that occur if both acetic acid and ethanol act as acids by donating a proton to water.

(1) The Effect of Delocalization

❒ Negative charge in the acetate anion is evenly distributed over the two oxygen atoms, whereas in ethoxide the negative charge is localized on its sole oxygen atom (as indicated by red in the electrostatic potential map).
❒ It is also reasonable to expect that a carboxylic acid would be a stronger acid than an alcohol when considering each as a neutral molecule (i.e., prior to loss of a proton), because both functional groups have a highly polarized O-H bond, which in turn weakens the bond to the hydrogen atom. However, the significant electron-withdrawing effect of the carbonyl group in acetic acid and the absence of an adjacent electron-withdrawing group in ethanol make the carboxylic acid hydrogen much more acidic than the alcohol hydrogen.

❒ Electrostatic potential maps at approximately the bond density surface for acetic acid and ethanol (Figure (3) clearly show the positive charge at the carbonyl carbon of acetic acid, as compared to the CH2 carbon of ethanol.

(3) Summary and a Comparison of Conjugate Acid–Base Strengths

(4) Inductive Effects of Other Groups

❒ The acid-strengthening effect of other electron-attracting groups (other than the carbonyl group) can be shown by comparing the acidities of acetic acid and chloroacetic acid:

❒ This is an example of a substituent effect. The greater acidity of chloroacetic acid can be attributed, in part, to the extra electron-attracting inductive effect of the electronegative chlorine atom. By adding its inductive effect to that of the carbonyl group and the oxygen, it makes the hydroxyl proton of chloroacetic acid even more positive than that of acetic acid. It also stabilizes the chloroacetate ion that is formed when the proton is lost by dispersing its negative charge (Figure (4):

❒ Dispersal of charge always makes a species more stable, and, as we have seen now in several instances, any factor that stabilizes the conjugate base of an acid increases the strength of the acid.

Which compound in each pair would be most acidic?

Share
Previous The Kinetic Molecular Theory of Gases
Next Conformations of Cyclohexane: The Chair and the Boat