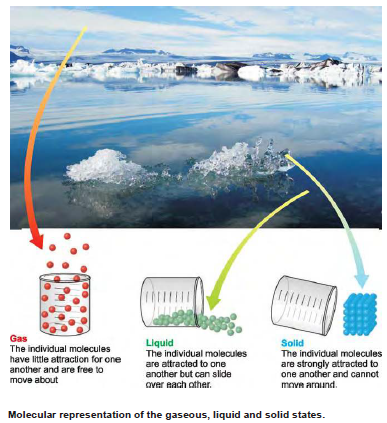 A gas consists of molecules separated wide apart in empty space. The molecules are free to move about throughout the container.
A liquid has molecules touching each other. However, the intermolecular space, permit the movement of molecules throughout the liquid.
A solid has molecules, atoms or ions arranged in a certain order in fixed positions in the crystal lattice.
The particles in a solid are not free to move about but vibrate in their fixed positions.
Of the three states of matter, the gaseous state is the one most studied and best understood. We shall consider it first.

(1) Expansibility
Gases have limitless expansibility. They expand to fill the entire vessel they are placed in
(2) Compressibility
Gases are easily compressed by application of pressure to a movable piston fitted in the container
(3) Diffusibility
Gases can diffuse rapidly through each other to form a homogeneous mixture.
(4) Pressure
Gases exert pressure on the walls of the container in all directions.
(5) Effect of Heat
When a gas, confined in a vessel is heated, its pressure increases.
Upon heating in a vessel fitted with a piston, volume of the gas increases.
The above properties of gases can be easily explained by the Kinetic Molecular Theory.

Parameters of A gas

A gas sample can be described in terms of four parameters (measurable properties):
(1) the volume, V of the gas
(2) its pressure, P
(3) its temperature, T
(4) the number of moles, n, of gas in the container

One millilitre is practically equal to one cubic centimetre (cc). Actually

The SI unit for volume is cubic metre (m3) and the smaller unit is decimeter3 (dm3).. 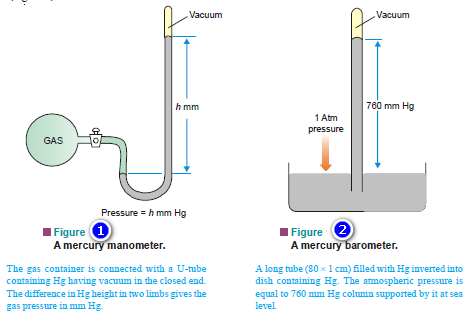 The temperature of a gas may be measured in Centigrade degrees (°C) or Celsius degrees.
The SI unit of temperature is Kelvin (K) or Absolute degree. The centigrade degrees can be converted to kelvins by using the equation.
K = °C + 273
The Kelvin temperature (or absolute temperature) is always used in calculations of other parameters of gases.
Remember that the degree sign (°) is not used with K.

The number of moles, n, of a sample of a gas in a container can be found by dividing the mass, m, of the sample by the molar mass, M (molecular mass).