Pressure of a Gas 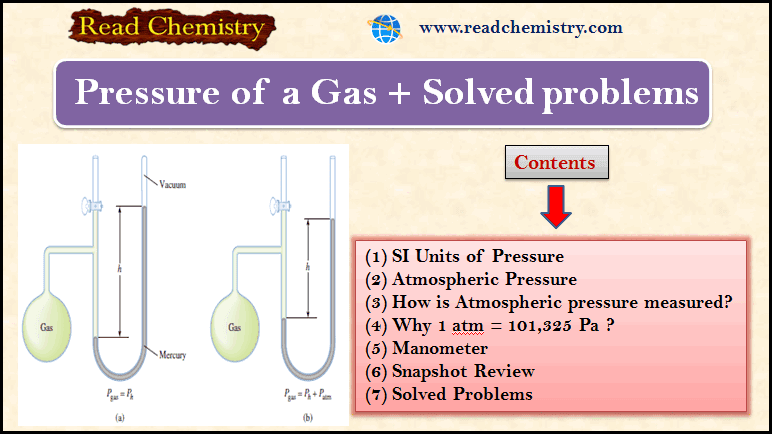 ❒ Gases exert pressure on any surface with which they come in contact, because gas molecules are constantly in motion. We humans have adapted so well physiologically to the pressure of the air around us that we are usually unaware of it, perhaps as fish are not conscious of the water’s pressure on them.

❒ Pressure is one of the most readily measurable properties of a gas. In order to understand how we measure the pressure of a gas, it is helpful to know how the units of measurement are derived. We begin with velocity and acceleration.
❒ Velocity is defined as the change in distance with elapsed time; that is,

❒ The SI unit for velocity is m/s, although we also use cm/s.
❒ Acceleration is the change in velocity with time, or

Acceleration is measured in m/s2(or cm/s2 ).
❒ The second law of motion, formulated by Sir Isaac Newton † in the late seventeenth century, defines another term, from which the units of pressure are derived, namely, force. According to this law,
force = mass × acceleration
In this context, the SI unit of force is the newton (N), where:
1 N = 1 kg m/s2
Finally, we define pressure as force applied per unit area:

❒ The SI unit of pressure is the pascal (Pa), defined as one newton per square meter:
1 Pa = 1 N/m2
❒ The following table shows the different  units of pressure:

Atmospheric Pressure
❒ The atoms and molecules of the gases in the atmosphere, like those of all other matter, are subject to Earth’s gravitational pull. As a consequence, the atmosphere is much denser near the surface of Earth than at high altitudes. (The air outside the pressurized cabin of an airplane at 9 km is too thin to breathe.)
❒ In fact, the density of air decreases very rapidly with increasing distance from Earth. Measurements show that about 50 percent of the atmosphere lies within 6.4 km of Earth’s surface, 90 percent within 16 km, and 99 percent within 32 km. Not surprisingly, the denser the air is, the greater the pressure it exerts.
❒ The force experienced by any area exposed to Earth’s atmosphere is equal to the weight of the column of air above it. Atmospheric pressure is the pressure exerted by Earth’s atmosphere ( Figure 1). The actual value of atmospheric pressure depends on location, temperature, and weather conditions. 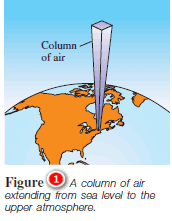 Does atmospheric pressure act only downward, as you might infer from its definition?
❒ Imagine what would happen, then, if you were to hold a piece of paper tight (with both hands) above your head. You might expect the paper to bend due to the pressure of air acting on it, but this does not happen. The reason is that air, like water, is a fluid. The pressure exerted on an object in a fluid comes from all directions—downward and upward, as well as from the left and from the right.
❒ At the molecular level, air pressure results from collisions between the air molecules and any surface with which they come in contact.
❒ The magnitude of pressure depends on how often and how strongly the molecules impact the surface. It turns out that there are just as many molecules hitting the paper from the top as there are from underneath, so the paper stays flat.

How is Atmospheric pressure measured?

❒The barometer is probably the most familiar instrument for measuring atmospheric pressure.
❒ A simple barometer consists of a long glass tube, closed at one end and filled with mercury. If the tube is carefully inverted in a dish of mercury so that no air enters the tube, some mercury will flow out of the tube into the dish, creating a vacuum at the top ( Figure 2 ). The weight of the mercury remaining in the tube is supported by atmospheric pressure acting on the surface of the mercury in the dish.

❒ Standard atmospheric pressure (1 atm) is equal to the pressure that supports a column of mercury exactly 760 mm (or 76 cm) high at 0°C at sea level.
❒ In other words, the standard atmosphere equals a pressure of 760 mmHg, where mmHg represents the pressure exerted by a column of mercury 1 mm high. The mmHg unit is also called the torr, after the Italian scientist Evangelista Torricelli, who invented the barometer. Thus,
1 torr = 1 mmHg
1 atm = 760 mmHg

❒ The relation between atmospheres and pascals (see Appendix 2) is:

By definition, the standard atmosphere is the pressure exerted by a column of mercury
exactly 76 cm high of density 13.5951 g/cm3, in a place where acceleration due to gravity is
980.665 cm/s2. However, to express pressure in N/m2 it is necessary to write:

The standard atmosphere is given by: 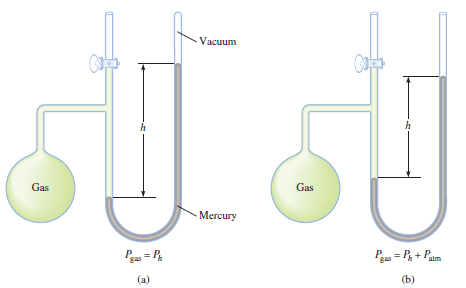 ❒ Nearly all barometers and many manometers use mercury as the working fluid, despite the fact that it is a toxic substance with a harmful vapor. The reason is that mercury has a very high density (13.6 g/mL) compared with most other liquids. Because the height of the liquid in a column is inversely proportional to the liquid’s density, this property enables the construction of manageably small barometers and manometers.
❒ The figure (3) shows Two types of manometers used to measure gas pressures.
(a) Gas pressure is less than atmospheric pressure.
(b) Gas pressure is greater than atmospheric pressure.

❒Pressure is defined as force per unit area.
❒Fluids (gases and liquids) exert a pressure at any point within them in all directions.
❒ We can measure a gas pressure by the vertical height of mercury it can hold up.
❒ The most important units of pressure in this course are the atmosphere (atm) and the torr (1 atm = 760 torr)

Example (1): The pressure outside a jet plane flying at high altitude falls considerably below standard atmospheric pressure. Therefore, the air inside the cabin must be pressurized to protect the passengers. What is the pressure in atmospheres in the cabin if the barometer reading is 688 mmHg?
Strategy:

Because 1 atm = 760 mmHg, the following conversion factor is needed to obtain the pressure in atmospheres

The pressure in the cabin is given by

the conversion factor we need is:

The pressure in kPa is: 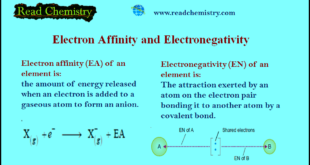