– What is the difference between your left hand and your right hand? They look similar, yet a left-handed glove does not fit the right hand.

– The same principle applies to your feet. They look almost identical, yet the left shoe fits painfully on the right foot.

– The relationship between your two hands or your two feet is that they are nonsuperimposable (nonidentical) mirror images of each other.

– Objects that have left-handed and right-handed forms are called chiral ( rhymes with “spiral”), the Greek word for “handed.”

– We can tell whether an object is chiral by looking at its mirror image (Figure).

– For example, a chair and a spoon and a glass of water all look the same in a mirror. Such objects are called achiral, meaning “not chiral.” A hand looks different in the mirror.

– If the original hand were the right hand, it would look like a left hand in the mirror.

– Besides shoes and gloves, we encounter many other chiral objects every day (Figure).

– What is the difference between an English car and an American car? The English car has the steering wheel on the right-hand side, while the American car has it on the left. To a first approximation, the English and American cars are nonsuperimposable mirror images.

Chirality and Enantiomerism in Organic Molecules

– Like other objects, Organic molecules are either chiral or achiral.

– For example, consider the two geometric isomers of 1,2-dichlorocyclopentane (Figure).

– The cis isomer is achiral because its mirror image is superimposable on the original molecule.

– Two molecules are said to be superimposable if they can be placed on top of each other and the threedimensional position of each atom of one molecule coincides with the equivalent atom of the other molecule.

– To draw the mirror image of a molecule, simply draw the same structure with left and right reversed. The up-and-down and front-and-back directions are unchanged.

– These two mirror image structures are identical (superimposable), and cis-1,2-dichlorocyclopentane is achiral.

– The mirror image of trans-1,2-dichlorocyclopentane is different from (nonsuperimposable with) the original molecule.

– These are two different compounds, and we should expect to discover two mirror-image isomers of trans-1,2-dichlorocyclopentane.

– Make models of these isomers to convince yourself that they are different no matter how you twist and turn them.

– A chiral compound always has an enantiomer (a nonsuperimposable mirror image).

– An achiral compound always has a mirror image that is the same as the original molecule.

– Let’s review the definitions of these words.

– chiral: (“handed”) different from its mirror image; having an enantiomer

– achiral: (“not handed”) identical with its mirror image; not chiral

– Any compound that is chiral must have an enantiomer.

– Any compound that is achiral cannot have an enantiomer.

– The three-dimensional drawing of 2-bromobutane in the following Figure shows that 2-bromobutane cannot be superimposed on its mirror image.

– This simple molecule is chiral, with two distinct enantiomers.

– What is it about a molecule that makes it chiral? The most common feature (but not the only one) that lends chirality is a carbon atom that is bonded to four different groups.

– Such a carbon atom is called an asymmetric carbon atom or a chiral carbon atom, and is often designated by an asterisk (*).

– An asymmetric carbon atom is the most common example of a chirality center (or chiral center), the IUPAC term for any atom holding a set of ligands in a spatial arrangement that is not superimposable on its mirror image.

– Chirality centers belong to an even broader group called stereocenters.

– A stereocenter (or stereogenic atom) is any atom at which the interchange of two groups gives a stereoisomer.

– Asymmetric carbons and the double bonded carbon atoms in cis-trans isomers are the most common types of stereocenters.

– Make a model of an asymmetric carbon atom, bonded to four different-colored atoms.

– Also make its mirror image, and try to superimpose the two (see Figure).

– No matter how you twist and turn the models, they never look exactly the same.

– If two of the four groups on a carbon atom are the same, however, the arrangement usually is not chiral.

– The following Figure shows the mirror image of a tetrahedral structure with only three different groups; two of the four groups are the same.

– If the structure on the right is rotated 180°, it can be superimposed on the left structure.

– We can generalize at this point, but keep in mind that the ultimate test for chirality is always whether the molecule’s mirror image is the same or different.

1. If a compound has no asymmetric carbon atom, it is usually achiral.

2. If a compound has just one asymmetric carbon atom, it must be chiral.

3. If a compound has more than one asymmetric carbon, it may or may not be chiral.

Identify each asymmetric carbon atom in the following structure

1. The (CHOH) carbon of the side chain is asymmetric. Its four substituents are the ring, a hydrogen atom, a hydroxyl group, and a methyl group.

– Notice that different groups might be different in any manner. For example, the ring carbon bearing the chlorine atom is asymmetric even though two of its ring substituents initially appear to  – CH2– be groups. These two parts of the ring are different because one is closer to the side chain and one is farther away. The entire structure of the group must be considered

– The following Figure illustrates a shortcut that often shows whether a molecule is chiral.

– If we draw a line down the middle of cis-1,2-dichlorocyclopentane, bisecting a carbon atom and its two hydrogen atoms, the part of the molecule that appears to the right of the line is the mirror image of the part on the left.

– This kind of symmetry is called an internal mirror plane, sometimes symbolized by the Greek lowercase letter sigma (σ).

– Since the right-hand side of the molecule is the reflection of the left-hand side, the molecule’s mirror image is the same as the original molecule.

– Notice in the following figure that the chiral trans isomer of 1,2-dichlorocyclopentane does not have a mirror plane of symmetry. The chlorine atoms do not reflect into each other across our hypothetical mirror plane. One of them is directed up, the other down 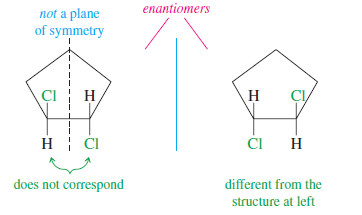 We can generalize from these and other examples to state the following principle:

Any molecule that has an internal mirror plane of symmetry cannot be chiral, even though it may contain asymmetric carbon atoms.

– The converse is not true, however. When we cannot find a mirror plane of symmetry, that does not necessarily mean that the molecule must be chiral. The following example has no internal mirror plane of symmetry, yet the mirror image is superimposable on the original molecule. You may need to make models to show that these mirror images are just two drawings of the same compound.

– Using what we know about mirror planes of symmetry, we can see why a chiral (asymmetric) carbon atom is special.

– In Figure 1,2-dichlorocyclopentane above showed that an asymmetric carbon has a mirror image that is nonsuperimposable on the original structure; it has no internal mirror plane of symmetry. If a carbon atom has only three different kinds of substituents, however, it has an internal mirror plane of symmetry (see Figure). Therefore, it cannot contribute to chirality in a molecule.